A main gameplay element that you should be familiar with when playing League of Legends Wild Rift (LoL WR) is how to play the lanes. Lanes are an important aspect of LoL WR since this is where you will farm for gold and experience. This is why you should know these essential laning tenets to help your team get the advantage and increase your chances of winning matches.

During Champion Select, you should declare which Champion you are going to play. This is essential for both Normal and Ranked Games since the former usually allows players to freely pick Champions. Meanwhile, playing Ranked Games requires you to lock in a specific role once you get into the Champion Select screen.

Your main goal during the early game laning phase is to farm as much Gold and Experience as possible. This can be done by killing the lane minions and opposing Champions. However, it’s not going to be that easy.

That said, if you can land your Abilities and Auto Attack on an enemy laner and they cannot retaliate, their HP can get low. Therefore, they will be forced to head back to their base to heal and consequently lose precious Experience and Gold. Last-hitting low HP lane minions is a crucial skill to master in any lane because it helps you get closer to increase your overall damage. Moreover, you can use last-hitting to control the lane you are playing in.

You can Freeze your lane by not attacking the opposing lane minions until you are sure that you can kill them with one auto-attack. Doing this helps you stabilize the lane by keeping the lane minion pressure at bay. This tactic is especially useful when your enemy laners have shorter ranged auto attacks than your champion.

Successful early game laning equates to having better items and higher levels than your opposing laner. So, you have to practice your last-hitting and harassing to get positive results.

The Mid-Game of any match is often the time when your team starts to call out for Objectives. This includes securing Dragons, Rift Heralds, and Turrets. In most cases, once two out of the three outermost Turrets of either team has been destroyed, that’s a sign that you are already in the Mid-Game portion.

For this laning phase, apart from still farming Gold and Experience, you have to be attentive and call out each time your enemy laners are missing. This is because when your enemy laners are not in their lane, they are either planning to gank other lanes or secure objectives. Conversely, you can plan with your teammates if you want to take out enemy Champions who are posing to be a threat so that you can shut them down.

During mid-game, it is good practice to place wards at areas in the map where you feel Champions often cross. This includes areas like bottlenecks at the river heading to the jungle creeps, the entrance to the Baron or Dragon Pits, and brushes near the main lanes. Actively doing this makes it easier for your team to figure out where the opposing team is. Your team can also make judgment calls more effectively.

In most cases, the game is typically decided in the mid-game phase since successful pulling off ganks and securing Objectives will swing the tide of the match to whichever team does it.

Vision is a crucial factor in the Late Game Laning Phase. Ideally, a match reaches the Late Game phase once teams have yet to break through the enemy’s base. At this point, a team may have to resort to lane minion support to pressure the defensive team to make a judgment call on how to defend their base.

Generally, you should have most of your items already by the late game. As far as laning tactics are concerned, your team should try to make your lane minions push all the lanes towards the enemy base. Your team has to clear the opposing lane minions while being keen on possible ganks from the opposing team. Clearing the lanes for your lane minions helps you apply pressure to the enemy team and gives you the advantage to get high-level objectives like Baron and Dragon as well as the jungle buffs.

Experienced players usually pressure two lanes to fluster the enemy and make them decide which one lane they would defend. If your early to mid-game laning phases are good, your team should have no issues breaking through the enemy base to destroy their inhibitors, and ultimately, their Nexus.

And there you have it! Some essential things you need to know to improve your laning game in LoL WR. Make sure to remember the different laning phases to help you make the right decisions during your matches! 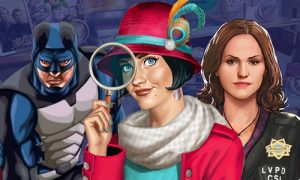 Crime doesn’t pay, in any form or deed, says the people who play crime-fighting games. Especially those who put themselves in the shoes of the police.
Posted on January 19, 2021

Character Update – Ant-Man & the Wasp in Marvel Contest of Champions

In conjunction with the new movie by Marvel Cinematic Universe, there are 2 new additions to Marvel Contest of Champions (MCOC)! With Ant-Man and the Wasp movie released on 4th July, Marvel movies are once again the talk of the town.
Posted on July 5, 2018