The Scariest Halloween Games For 2021 – RANKED

When you think of Halloween, the first thing you will likely think of is people wearing costumes and kids knocking on doors to get candies. But aside from costumes and candies, another thing that’s associated with Halloween is that it’s a scary day. It’s also known as All Souls Day, a day dedicated to the dead. This is why during this period, the theme is usually ghosts, monsters, and so on.

So, if you’re someone who’s into ghosts, monsters, and scary stuff, then Halloween is your holiday. But who says that you have to wait for Halloween just to enjoy scary things? You can have your dose of scary themes yearlong with Halloween-themed games. That’s right, there are many scary games out there, which will make you feel like Halloween whenever you play them.

But with many different scary games available, which one should you play? Well, let this infographic help you as we rank the scariest Halloween games available for 2021.

Probably the scariest game that you can play right now is Identity V. It’s a survival multiplayer role-playing horror game published by NetEase Games. It’s a game that’s played by 4 players; with 1 player playing the role of a hunter while the 3 are playing the role of survivor. The survivors’ goal is to avoid the hunter and escape from the estate. As for the hunter, the goal is to prevent the survivors from escaping and send them back inside the manor.

What’s scary about this game is its environment and atmosphere. The game is set during a foggy night in a large estate with a haunted-looking manor. If you’re playing the role of a survivor, you’ll likely feel as if you are a part of a scary thriller movie trying to escape from a killer psychopath monster. You can add on the fact that the hunter can also torture the survivors and the avatars available are eerie monsters.

It’s a bonus that you’re playing with other people. We rank Identity V as the scariest Halloween game you can play. And it has a score of 9 out of 10.

The second-ranked scariest Halloween game for 2021 would have to be given to Death Park 2. It’s the second installment of the Death Park series and the continuation of Charlie’s story. He is the kid who was trapped in the nightmare world in the first game. But in this game, it’s his sister who’s trapped. The game features many elements that you’d find in a typical horror setting. An abandoned-looking town, scary monsters, switching between the real world and the nightmare world, and an evil scary clown.

It’s a game that mixes many of the elements that are found in nightmares. So, don’t be surprised to find yourself at the edge of your seat as you play this action-adventure horror in 3D graphics. We give this game a rating of 8 out of 10.

Another scary game that is actually tied for second in our rankings is Specimen Zero. It’s an arcade horror 3D multiplayer game published by Café Studio. It’s a game where your goal is to escape from an unknown place. After being kidnapped, you woke up in a place that looks like an abandoned hospital. But it’s not just a typical abandoned hospital, as something seems out there lurking and waiting for you.

It’s an exciting game that’s full of jump-scare moments, especially as you encounter the hideous-looking monsters roaming around. Aside from dealing with them, you also have to solve puzzles to unlock doors and escape the terrifying place. With its scary gameplay and premise, this game deserves an 8 out of 10 as well.

Another game that also involves kidnapping and evil scary beings is Ice Scream 3. But instead of being the one kidnapped, your role here is to investigate and help free kids who are kidnapped. You will play the role of a kid in this arcade horror game and your goal is to solve the mystery involving the evil ice-cream seller. The game also features a spooky setting with lots of jump scares.

The environment itself is not that scary since the ice cream factory doesn’t look abandoned. But it does provide a creepy and unsettling feeling as you explore and try to find ways to solve the mystery and save the kidnapped kids. This first-person 3D game from Keplerians Horror Games gets a 7 out of 10 rating.

This horror game is not full of jump scares like the other games ahead of it in the rankings. But it doesn’t mean that Distraint is not scary. It’s a casual adventure 2D side scroller where you play the role of an ambitious young man named Price. What he does is seize properties from other people who couldn’t pay. But his encounter with an old lady affected him mentally and psychologically. That psychological impact will manifest itself throughout the game.

What makes Distraint scary is that it’s a psychological horror. You’ll encounter many demons and monsters along the way, which are all manifestations of what Price is feeling inside. It’s a very relatable game, especially if you have your own inner demons. And because of that, it’s also getting a score of 7 out of 10.

Probably the simplest horror game on this list is 100 Doors Horror. It’s an escape puzzle horror game where your goal is to open the door in front of you to escape. To unlock and open the door, you’ll need to solve a puzzle first. The puzzles, in the beginning, are easy, but as you progress further, they become more difficult to solve.

What makes this game scary is the atmosphere it provides along with the music. It provides an eerie and scary feeling while you try to solve the puzzles in front of you to open the door. It makes you feel like something sinister is up ahead. Despite the scary atmosphere, there’s really nothing that special about it, which is why it only gets a score of 5 out of 10.

The 2D game features a scary setting and you have the option to choose the environment. The only reason why it’s last on this list is that it’s not as scary as the other games above it. It also gets a rating of 5 out of 10.

Halloween is the occasion where scary themes are usually front and center. But, why wait for Halloween to experience fear and terror when there are scary Halloween games available for you to play. Just look at this list to play the scariest Halloween horror games available on PC.

Toon Blast has just released an update on 19th June, 2018. Other than the addition of 50 new levels for the smarty pants who have completed all the current levels in Toon Blast, behold the newest, wackiest item in the game: IVY!
Posted on June 21, 2018 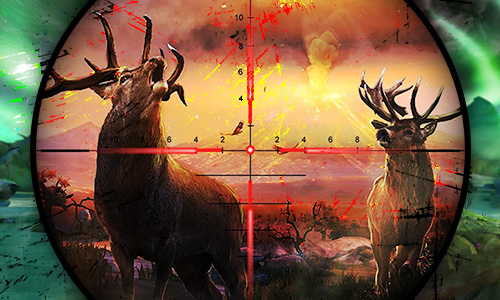 Deer Hunter Game Review – Be the Best Hunter in the Wilderness

Elevate your hunting skills to the next level by playing Glu’s Deer Hunter Classic. It is a first-person shooting game that will let you experience the wilderness.
Posted on February 16, 2022