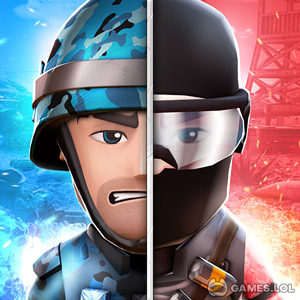 Suppose you are looking for a fresh new take on the competitive multiplayer genre. In that case, you are in for a treat as the highly acclaimed 2D multiplayer match is now available on PC. Experience explosive cloning battles against your friends or random players across the globe. Design your army and show off your tactical prowess in this one-of-a-kind free-to-play game for the PC.

Clone Armies: Tactical Army is a free-to-play online multiplayer 2D game developed and published by Elecube in 2015. As the title suggests, it employs the use of unique tactical gameplay mechanics infused with cloning elements. This unusual concoction of elements led to over 8 million installs and an impressive average rating of 4.21/5 stars on the Android platform alone.

Part of what makes the game popular among tactics enthusiasts comes from combining elements that work harmoniously with each other. More than just your typical multiplayer game, it also features base/character customization and upgrades. On top of these features is the wide selection of military units and equipment with their own set of attributes and specialties.

Making it even more immersive are the epic boss fights, intuitive controls, customizable base, and multiple game modes just waiting for you to explore. As impressive as those features are, those are just the tip of the iceberg as the game has more features and surprises concealed within its core. Therefore, if you think you have what it takes to become the ultimate tactician, check out this game with your friends and enjoy it online.

How to Play This Game?

Compared to most multiplayer games, Clone Armies: Tactical Army has a short introduction detailing the game’s main plot. After the brief introduction, the game will immediately take you to your first battle, which also serves as the tutorial phase. Your first battle will introduce you to the essential gameplay elements of the game. This phase will also brief you with the basics of upgrading and unlocking characters.

The completion of the first mission will provide you with your first set of rewards. The challenge begins right after the tutorial phase. You will face the escalating level of difficulty as you progress further into Clone Armies: Tactial Army. Easy right? So what are you waiting for? Download, install, and play the game now with your co-player for free on your PC today!

If you had fun playing this game, then, playing more will keep you ahead of your adventure! Do you want to try more action games? Check out some games like Flippy Knife or Gun Shot Fire War for free. Download and play on your PC now!