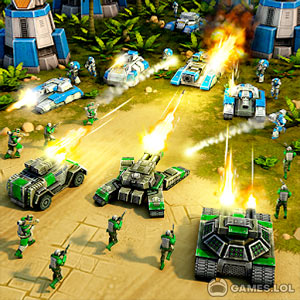 The lush tropical jungles are not only rich in flora and fauna – but they also have a sizeable stash of treasure in Jungle Heat: War of Clans. Unfortunately, General Blood conquered the natives and took over their sources of oil and gold! It is up to you to conquer your foes and take their resources into your safe hands. Charge straight into your enemy territory and fortify your defenses for an incoming counterattack!

Jungle Heat: War of Clans PC takes heavy inspiration from Clash of Clans. This means that it is an asymmetric RTS where you deploy troops to steal resources from other players! As an asymmetric RTS, Jungle Heat: War of Clans PC allows you to attack players even if they are offline. However, the same goes for your foes, so grab your hammer and start fortifying your base!

The game features a colorful cartoony art style which perfectly depicts the battlefields, the bases, and even the jungles! The war will rage on even if you log out. Thus, you have to prepare your defenses for whatever type of destruction is coming.

Drag your troops in the battlefield and they will fend for themselves. Each type of troop has its own priority target, so you have to place the right type of troop with perfect timing. Otherwise, your troops can end up heading straight into a massacre.

Go ahead and grab your free Jungle Heat: War of Clans download! Then check out new Strategy Games free to download, like Pocket Tanks and Clash of Clans!