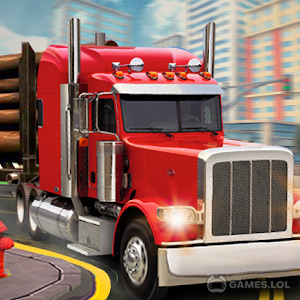 Have you ever wanted to experience the life of a gangster? Live the high life, do whatever you want, and explore the city without any rules and boundaries. Do crimes, fight against the police, and steal millions of cash from people. Equip yourself with high-caliber weapons, up to your game with various designer clothes, drive luxurious cars or even tanks! Do whatever you want in this fun and thrilling open-world game. Only the sky is the limit. Download and play the online Truck Driver City Rush game now and experience the dangerous lives of gangsters on your PC.

Work your way towards becoming the kingpin of all gangs in the city. Do various missions and follow the story behind the obstacles that you have to face to become the best of all gangs. Gain all of the people’s respect and don’t let anyone get in your way.

If you loved playing GTA before, then you will surely love playing this game. Truck Driver City Rush has open-world gameplay wherein you can do anything you want. The game doesn’t dictate what you have to do, you are given no rules or instructions. All you have to do is live your life and do whatever you want. You will be the one who’s in control of everything. Explore the city, drive any cars you want, use your weapons and shoot down anyone who gets in your way. Get rich and become the kingpin of all gangs in the city!

Tons of Weapons & Upgrades to Choose from

One thing that separates this game from GTA is the availability of numerous weapons as well as attires to choose from. What’s great about this game is that when you have purchased a certain weapon it doesn’t get dropped when you get killed. No need to look out for weapons or kill the police with only your fist just to get a weapon. You’re well equipped and ready to rage once you are reborn. Shoot everyone out no one’s going to stop you with your high-caliber weapons!

Naxeex Studio did the right thing of including missions that have a storyline behind it. All missions are connected to each other and the story is revealed little by little as you accomplish one mission from the other. Complete all missions and unlock the mystery of the game. The mystery behind these missions makes the game appealing and at the same time makes the gamers curious so you’ll be playing more and more. Missions are never-ending and they are scattered all through the city. Once you get to finish a mission you are rewarded with cash that you can use to purchase weapons and other upgrades.

Doing missions is one of the most important things in this game. Finishing a mission rewards you a lot of cash as compared to killing citizens that you pass by. Moreover, you get to discover the story of the game. Meet new people, and learn how it all started. Get to experience the journey towards becoming the next kingpin of all gangs in the city!

Missions are unique form each other so boredom in this game is never a problem. Explore the city and choose which missions to accept. Different scenarios are given in the game’s missions such as robbing a bank, eliminating a high profile person, or saving a certain individual from a group of gangs. It just gets exciting each time you play.
Save up your money for something BIG.

Despite being able to do whatever you want in this game, saving up the money that you get from missions as well as from innocent citizens will surely pay off. High-caliber weapons are quite expensive and would need a big chunk of your money to get them. Usually, expensive weapons and upgrades are the ones that have the biggest benefit. Having these items will make your life easier, especially when doing missions. So, don’t mind buying the cheap ones and save up for the better ones because they will serve you better and will make your money’s worth it.