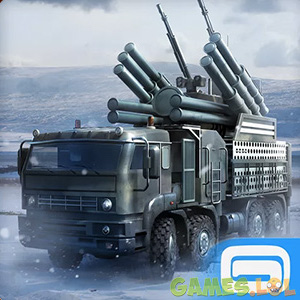 Show off your strategic and tactical prowess in World at Arms from veteran video game publisher Gameloft. Jump into the chaotic world where conflict is a norm and freedom is scarce. Wage war against formidable foes, strengthen your defenses, train soldiers, and dominate for survival. For a free download of the game, scroll down below and get World at Arms for your PC.

Build the Ultimate Base and Join a Powerful Faction

Building the perfect fort is a major element of survival in World at Arms. However, despite the plethora of fortification options in the game, nothing can beat the benefits of a strong ally. With that said, in order to achieve greatness, a strong faction backing you up is an option that is impossible to ignore. Factions in the game can give access to reinforcement, shared facilities, coordinated attacks, and so much more!

Tech Upgrades in World at Arms

World at War unlike other strategy game titles is set in the future which means that players can enjoy the use of modern tech. In line with that, one particularly interesting feature in the game is the superweapon Atlas. Achievable through tech upgrades, Atlas is a ginormous mecha-like contraption dubbed as the ultimate field weapon. This giant that can inflict a ridiculous amount of damage to your enemies. Also available in the game are the Jotunn and the Prometheus, both of which comes with the same build as Atlas.  Check out other strategy games from our collection like Balling and Empire: Four Kingdoms.

Follow these easy steps to complete
your World at Arms installation.

Leave a Review for World at Arms

All Reviews for World at Arms

Are you into the Wild West or perhaps want to be a cowboy someday? Then this game is definitely for you! Bounty Hunt: Western Duel Game will take you into an action-filled adventure where you will play as a deadly bounty hunter. Take on challenging missions and shoot your way to victory. Earn cash and […]

Have fun creating your own mini world on Cubic Castles: Sandbox World Building MMO! Enter a realm that’s full of exploration and creativity. Gather building materials such as rocks, soil, and wood from the forest, and then start crafting your own realm from scratch! Create unique terrains, plant trees, flowers, and build your very own […]

Legacy of Discord – Furious Wings takes you to an action-packed adventure where you play as a powerful hero striving to become the best warrior in the universe. Experience the most intense real-time combat as you raid dangerous dungeons, fight off enemies in the Arena, and dominate PvP Battlegrounds. Fight your way to the top […]

A new city is on the rise and its lacking one thing, a mayor. If you think you have the administration and planning skills to run a city, then, it is time for you to prove it with Megapolis. From the studios of Social Quantum Ltd., developer of the iconic Dragons World simulation game comes […]

The Battle Cats is always known for its bizarre humor beyond its already-impressive gameplay. Throughout the course of its lifespan, the tower defense game garnered much reputation thanks to its odd comedy to the point where it became popular to the anime community. Thus, PONOS – the dev team of The Battle Cats, managed to […]

Throughout the years, we have been blessed with great horror games. Resident Evil, Silent Hill, Fatal Frame System Shock, Dead Space, Slender, and Five Nights at Freddy’s as one of the few. As Games.lol continues to grow, we want to share with you new horror games to look out for this 2019! Horror games here […]

Angry Birds has been around for 10 years and it seems like it’s not going anywhere soon. With the gaming world constantly gets bigger and more games evolving, playing Angry Birds in 2019 still feels fresh and exciting. Do mind that Angry Birds made the whole physics puzzle game genre popular to the eyes of […]