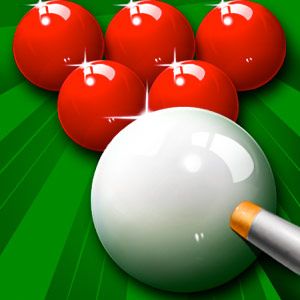 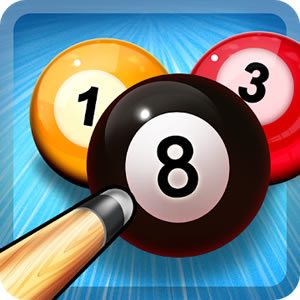 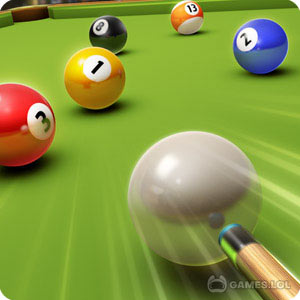 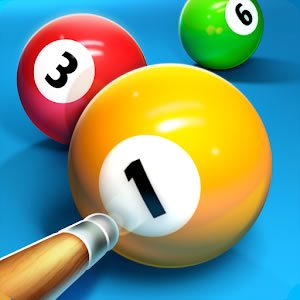 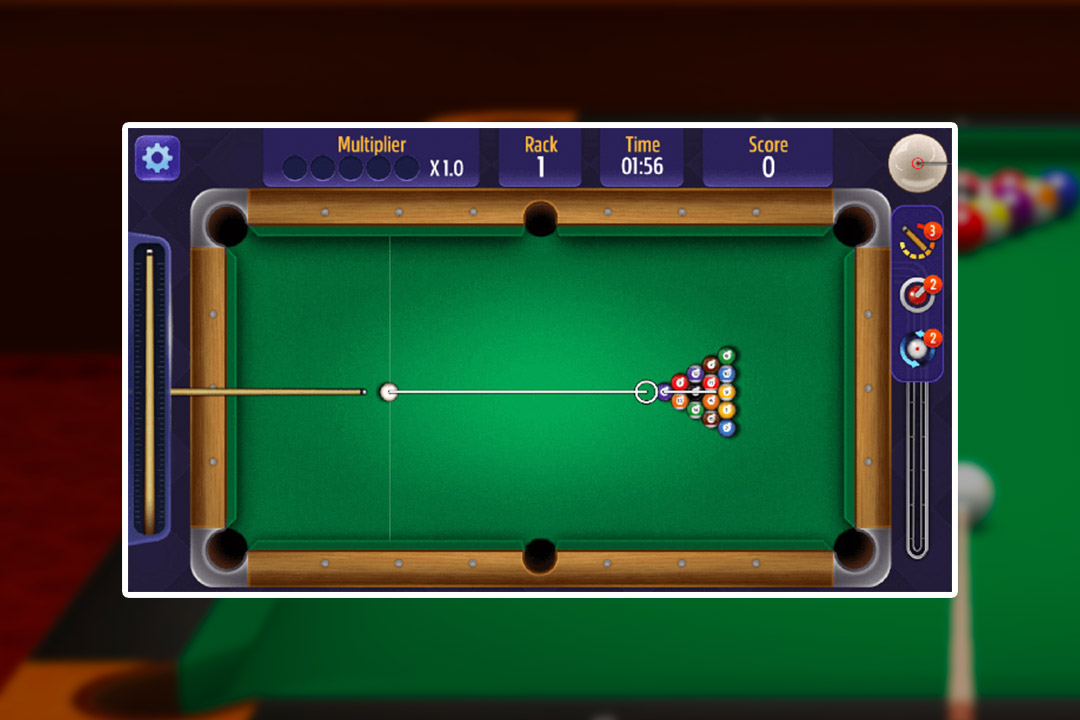 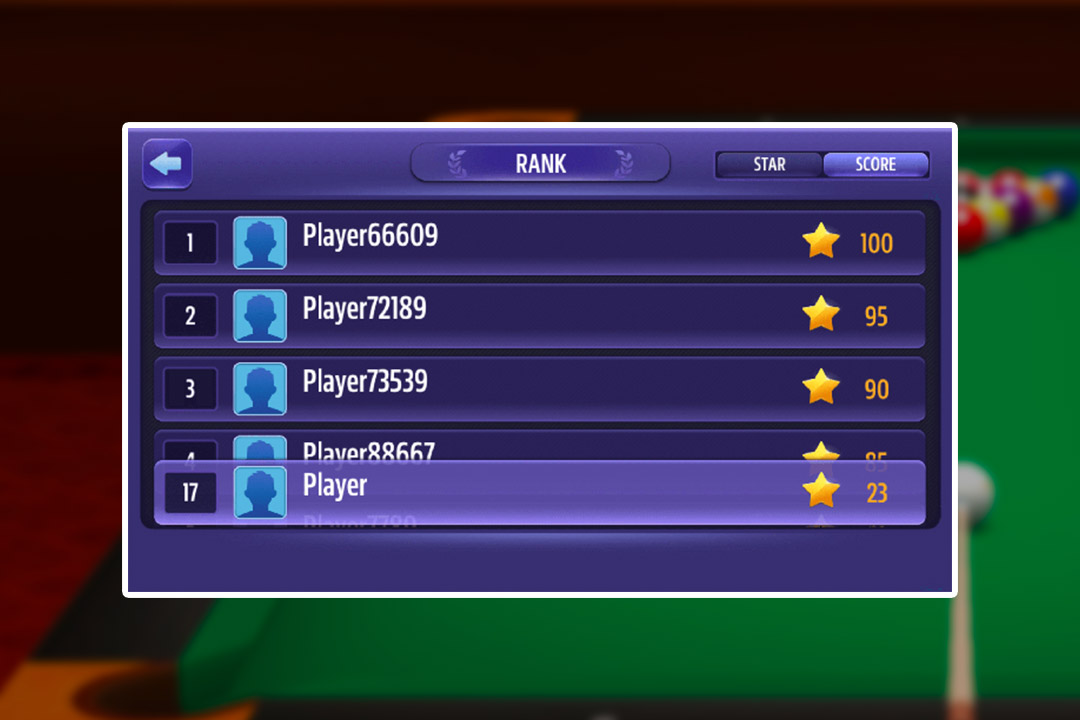 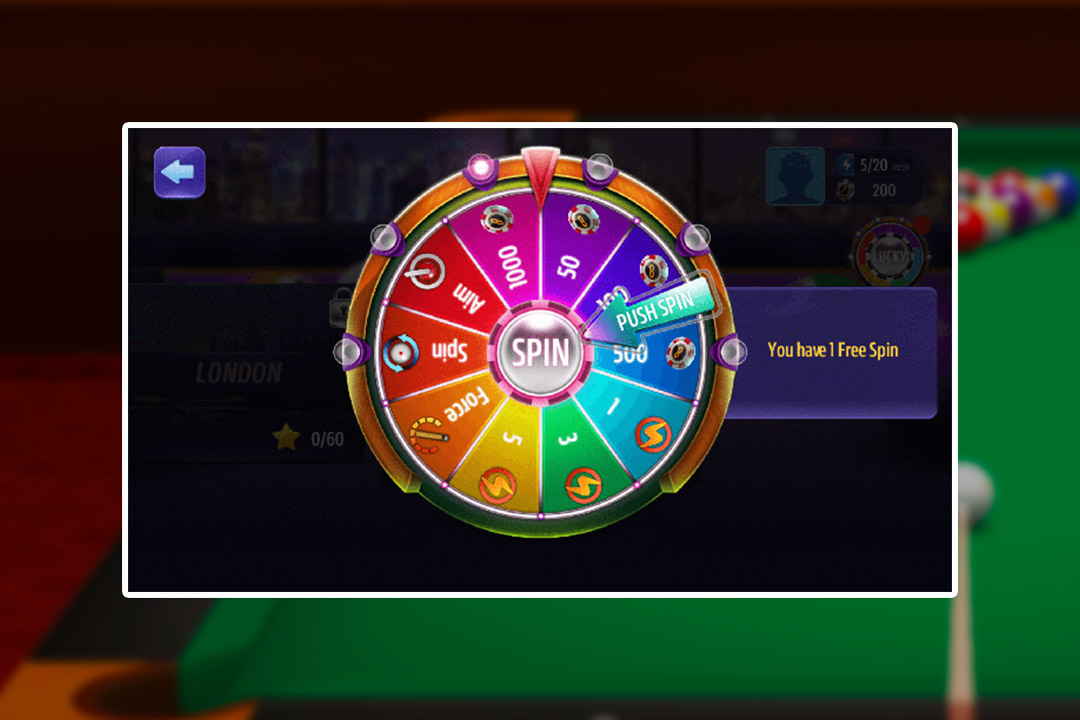 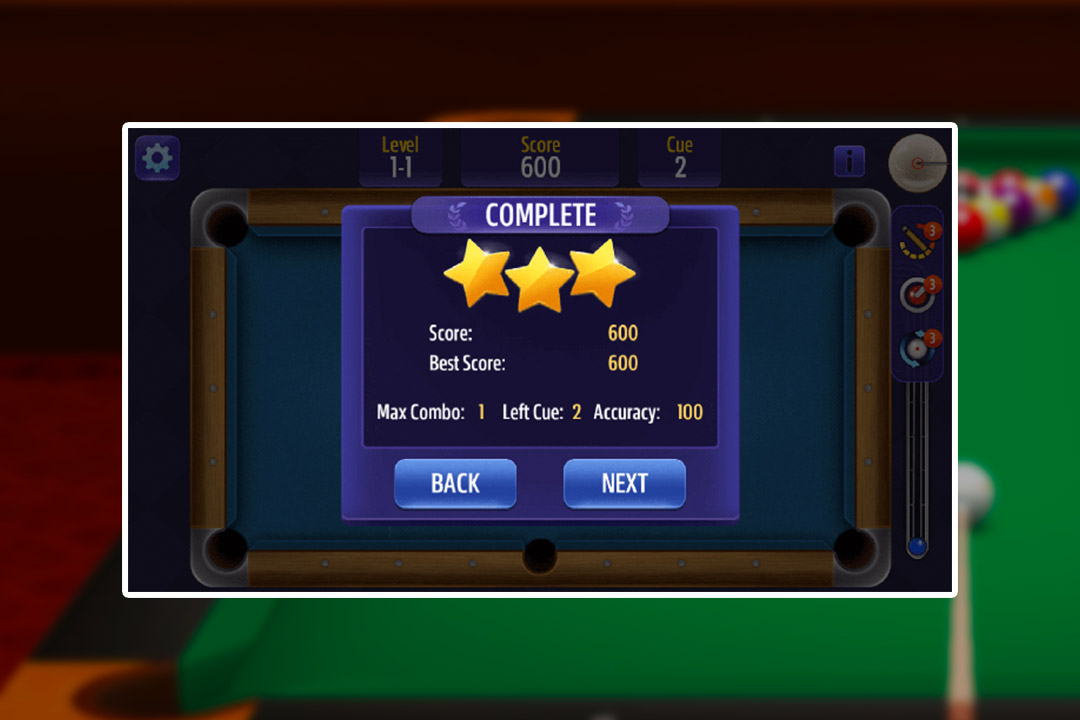 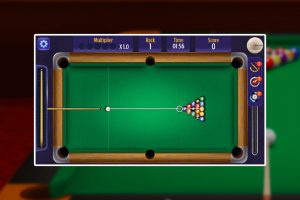 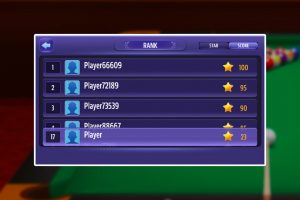 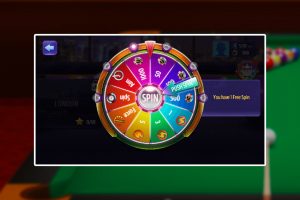 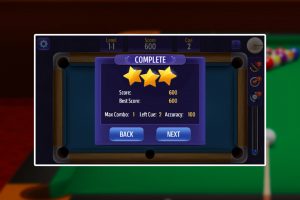 Billiard is the most popular casual billiards game for pool, with over 50,000 downloads! This 8 ball pool game developed by 3DGames promises you an entire “night” of fun and casual concentration. If you enjoy playing billiard or pool, then this game will actually help you hone your skills by making use of “physics” to break down the game in order for newbies or professionals to learn which moves are the best. You can also get to know about the rules for the game if you’re new to pool. If you’re an experienced billiard player, you can challenge other players in the online version for 2 players unblocked games! 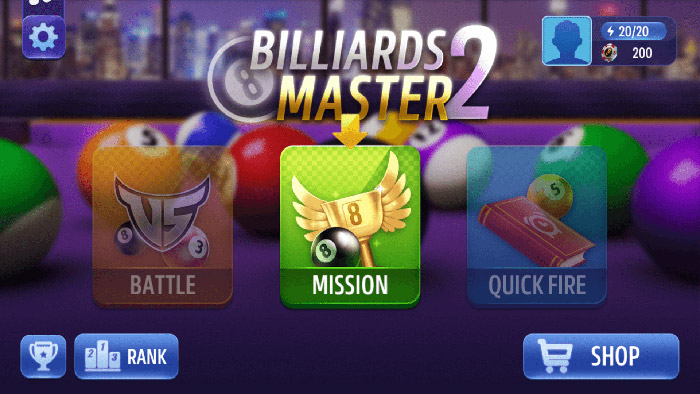 Here Are Some of the Game Features You Love!

There are many game scenes in the game here from all over the world. You start with Berlin and then move on to Bendigo, Riga, Bangkok, London, and Rome. There are 60 levels for each country’s gameplay. Do your best to conquer all the unique challenges they throw at you and triumph for each level! Can you get all three stars with a high accuracy mark? 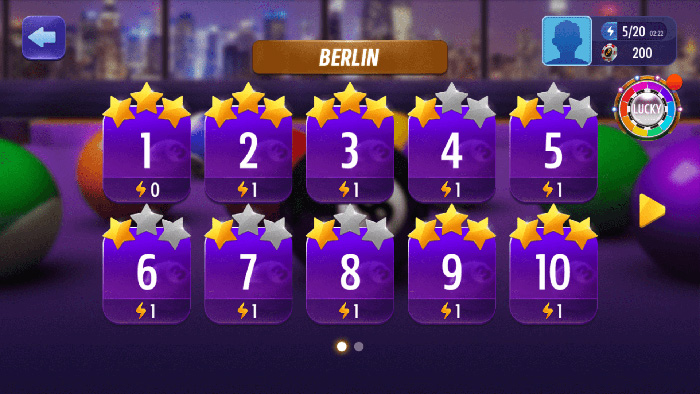 This game is simple to learn, and there are tutorials at the beginning of the game. Our only gripe is that the flashing words that come on-screen leave as quickly as they come, and it’s hard to catch all the words.

The tutorial will help you to grasp the basic rules of the game, and as you progress through the levels, you’ll discover new challenges that make the game trickier than just potting balls into the table with fewer cues. 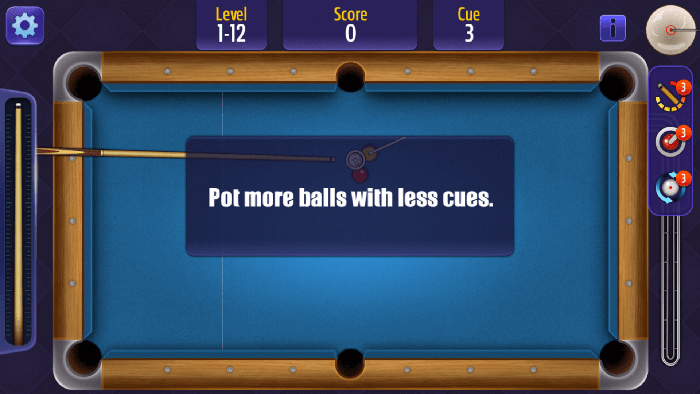 By making use of simple physics, 3DGames has made the game is incredibly realistic – you’ll be able to feel the texture of the table simply by observing how the balls roll across the table in correspondence to the strength of the hit, as well as hear the sound of the balls hitting the side of the table and the crack of the cue stick. The rules are exactly the same, except for the missions because of the added dimension of challenge that would make it more complicated than your typical pool game! Pot the balls that were given to you on the pool table without accidentally dunking in the white ball! 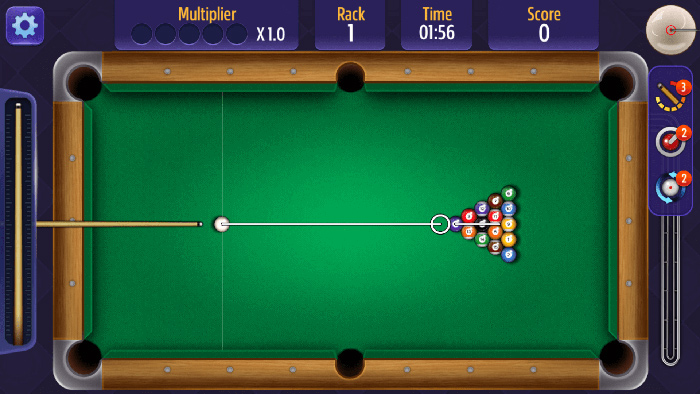 There are many levels in this game, with different levels of difficulty. The main point is this though: try to get in as many balls as you can with the least number of cue stick hits! It gets tougher and tougher, and you may have to retry many times in order to pass as you go on, but either way, it’ll still be hours of non-stop fun! You can even take turns with your friend to try to finish the stages; both of you can make it a game within a game for who can pot the most balls! 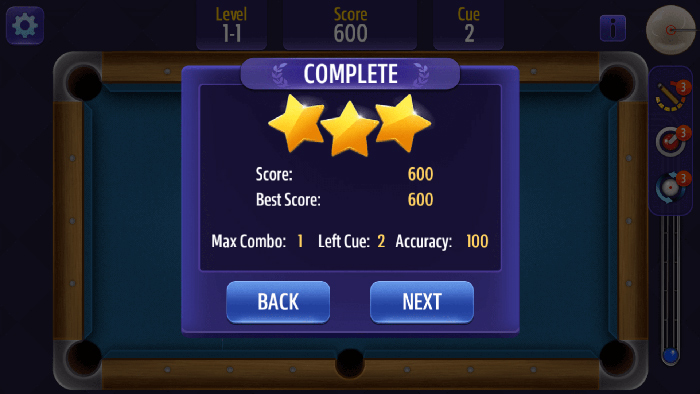 Unlock Rewards when you finish “achievements”

Achievements are like personal mission goals in the game. Make it count when you finish what each achievement needs you to accomplish, and get rewarded! The rewards contain elements of great value that helps in the upgrading your current cache of ability. 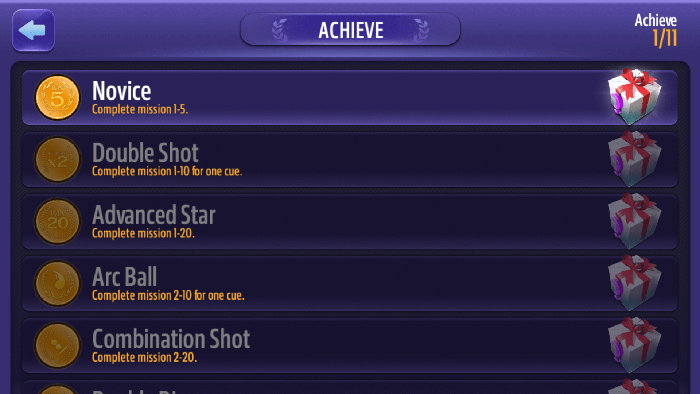 You can monitor your ranking on the ranking page to see your standing in the world. Motivate yourself to move up the leaderboard! It’s fun to see yourself climbing up the ladder when you get better and better. 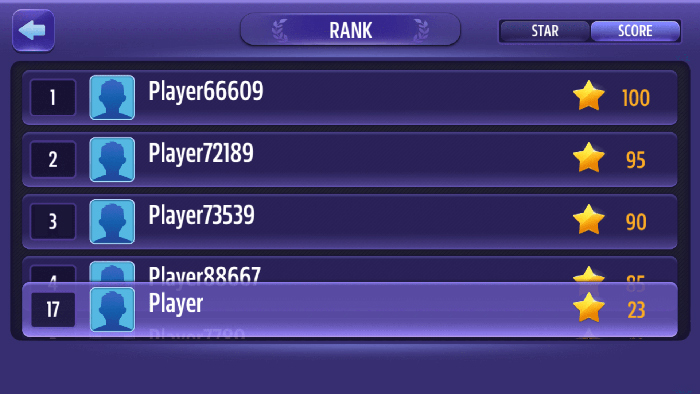 You can challenge other players around the world, but you’ve got to pay a small fee to get into the arena. Battle by country! There’s a time limit for each player when it comes to their turn, so use the time quickly and smartly because if you overrun your time limit, the turn goes to your opponent – and what a waste that would be! 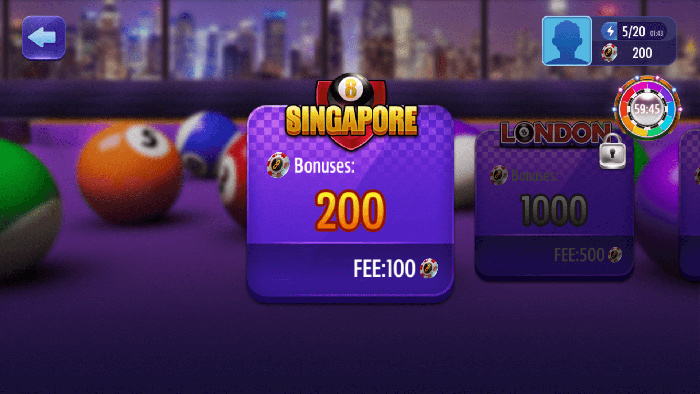 Tips, Tricks & Other Info on Billiard

Invest in a good cue stick

A good cue stick makes a lot of difference because it increases your “luck” and skill point. You will be able to make more precision shots without the balls going too wayward. With the new cue, you can shoot more powerfully, elongate your aiming guides, increase the time needed for you to shoot, as well as improve your cue ball control! The longer you play, the more cue sticks you’ll get to unlock for purchase.

Don’t challenge high ranking players when you’re not one

If you’re just starting out and itching to play with other players, make sure you challenge players who aren’t too much out of your league. There’s nothing worse than losing a wealth of money to someone just because you picked the wrong stakes table. Choose the “least high staked” table and play on it before you advance on to win more money at higher bidding tables!

Like we’ve mentioned, the time element of the game is important. You can’t take your own sweet time, or your turn will go to your opponent without you sinking any balls in. Shoot faster by rotating your cue stick using the area around your cue stick to adjust your aiming guide. Click and drag on the table surface with your mouse and don’t dilly dally!

Earn your rewards by logging into the game daily. There are loads of prizes and rewards to be won, like playing chips, energy, spin, aim and force boosters. 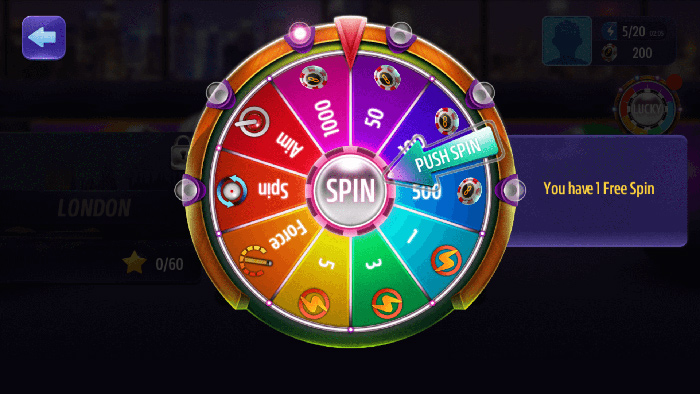