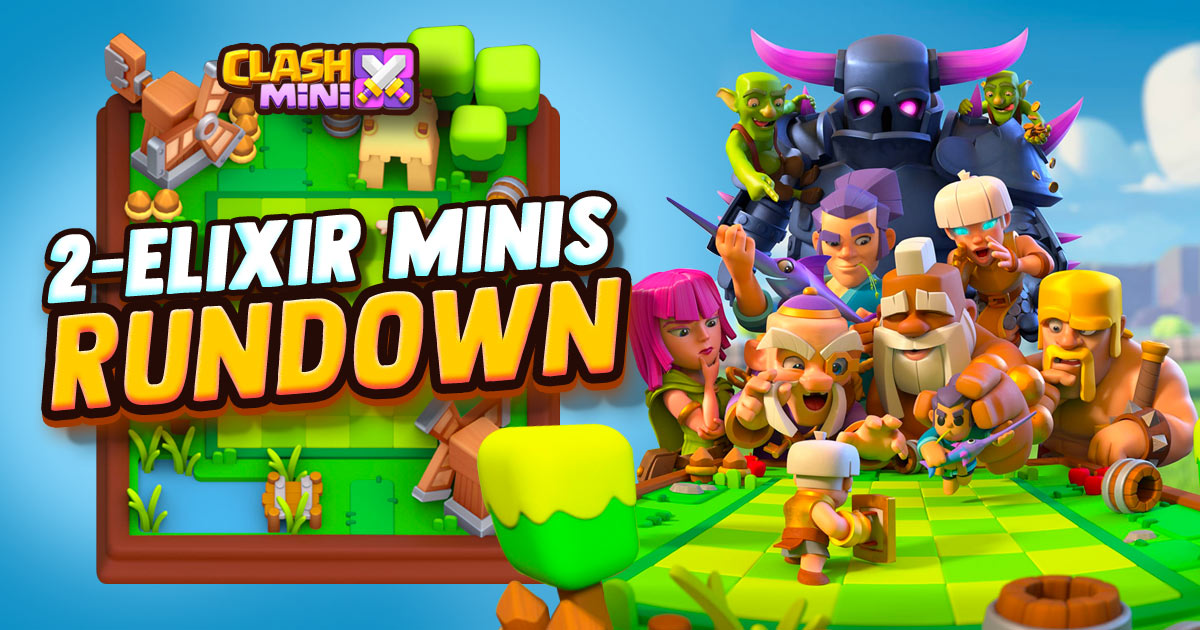 Clash Mini is evolving to become one of the fastest-growing strategy games in the freemium market in 2022. Since its launch in 2021, the game has managed to accumulate millions of downloads across various gaming platforms. The success of this game is highly anticipated given that it comes from Supercell – the studio responsible for the Clash franchise. As expected, this game comes with some of the iconic Clash Mini Heroes seen in other clash games. One of which is the use of Elixirs in the game.

With that said, if you are new to the game and want to know more about elixirs, especially 2-elixir minis, then you are on the right page. We will be taking a quick look at some of the characters that fall under the aforementioned category. So without further ado, feel free to check out our complete list of 2-elixir Clash Mini Characters below.

Before we jump into the list, you must know the function of the element called Elixir. For starters, battles in Clash Mini takes place in an Arena. Each battle can last up to five minutes of which both players must show off their strategic skills by spawning characters called minis in the field. This is where the Elixir elements come into play as each character requires a specific amount of Elixir to spawn. All in all, there are three groups of minis – the 2-Elixir, the 3-Elixir, and the 4-Elixir.

Today we will be taking an overview of all the 2-Elixir characters available in the game.

Our first 2-Elixir mini is the Knight, which is obtainable from quests, chests, or the in-game store. This mini comes with a high HP with moderate damage output. Furthermore, the Knight also comes with a unique ability called Chivalry, which reduces the amount of damage received for five seconds. Other abilities of this mini include Plate Armor (Chivalry plus 3-second Block), Mocking (Draws attacks towards him for a short time), and Light Armor (reduces the energy required for Chivalry by 1).

Similar to the Knight, the Barbarian is obtainable through quests, the shop, or chests. Moreover, the Barbarian is also a single-target mini with a moderate HP and damage output. The special ability of this mini is called Rage, which boosts his attack speed up to ten times in each round. Other abilities of this mini include Endless Rage (Indefinite stacking of Rage), Critical Strike (provides the mini with a small chance to inflict an additional 1 damage per attack), and Pride (the mini will gain 1 more damage for a short time after defeating an enemy). 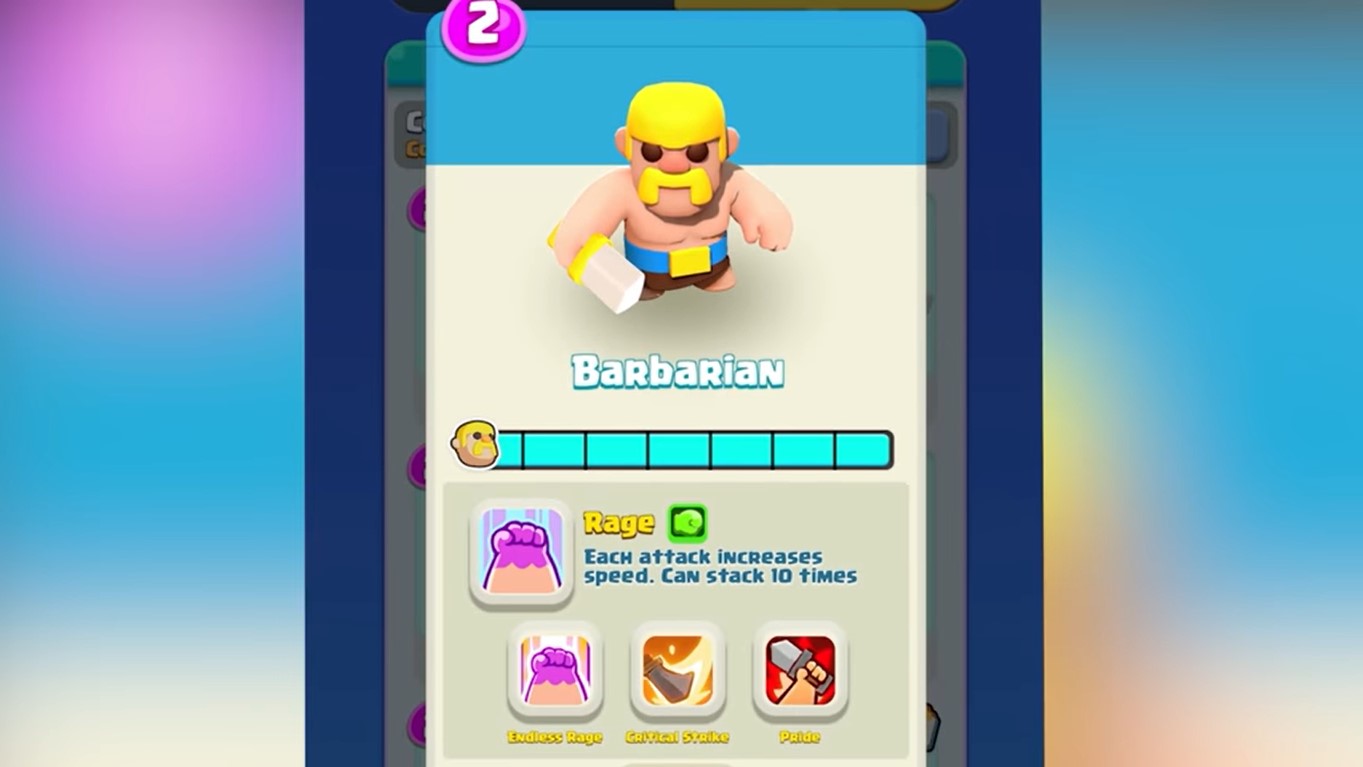 Obtainable through the shop, quests, or chests, the Miner is a single-target melee mini with a low HP and damage output. The special ability of this mini is called Burrow which as the name suggests, allows him to dig his way to the back of the opponent’s board. Other skills of this mini include Surprise (which allows the mini to gain additional damage when he attacks the opponent from behind), Excitement (increased speed and movement for a short time after defeating an enemy), and Big Shovel (the mini can execute an arcing attack towards enemies).

The Archer is another 2-Elixir mini that’s obtainable through the shop, chests, or quests. In addition, this ranged mini comes with low damage and HP. The special ability of an Archer is called Long Bow, which allows the mini to attack the farthest opponent. Other abilities of the Archer includes Archery (allows the mini to hit an additional target but will reduce the attack speed), Pride (provides the mini with an additional 1 damage after defeating an enemy), and Rush (Increases the movement speed for seven seconds at the start of the round). 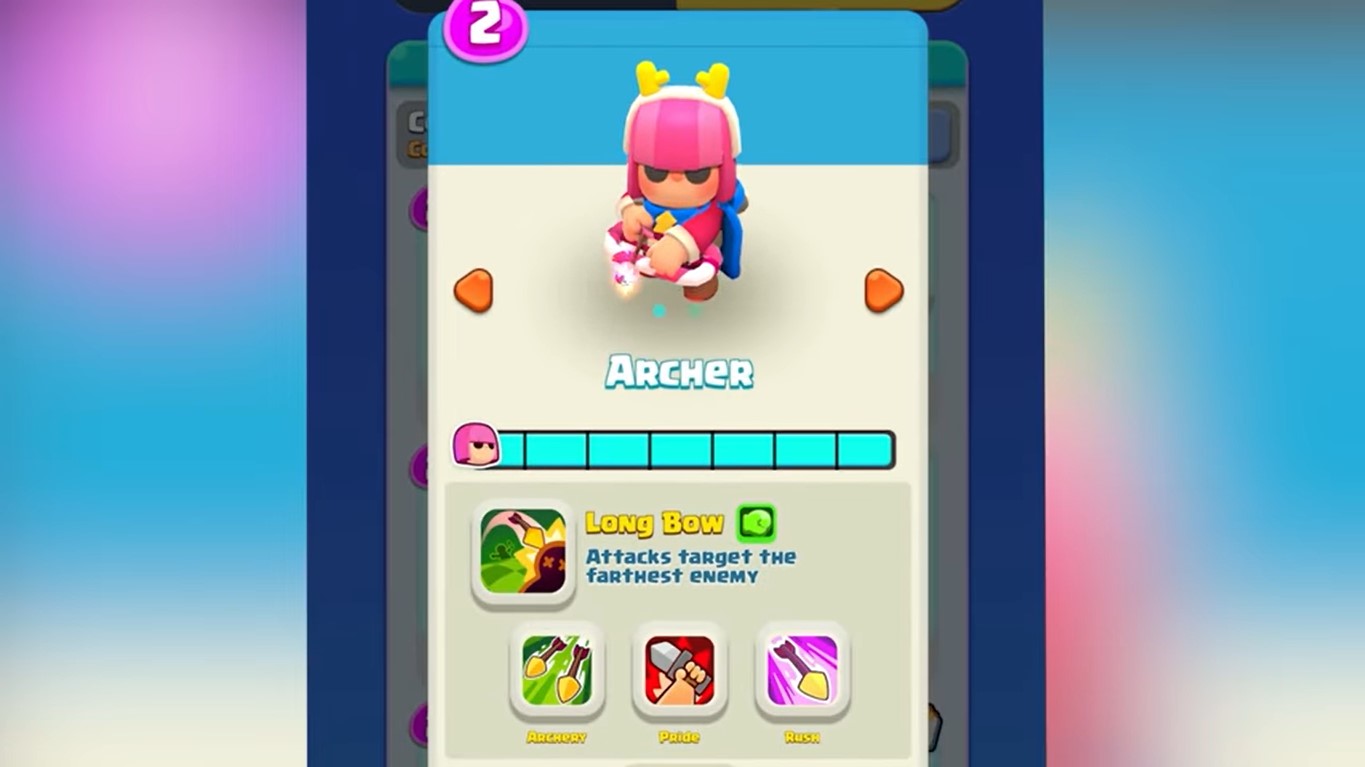 Another 2-Elixir ranged mini is the Spear Goblin, which just like the Archer, is obtainable through quests, the shop, or chests. Similar to the Archer, the Spear Goblin comes with a low HP and damage. The special ability of this mini is called Spear Toss, which allows him to throw a huge spear at the beginning of each round that deals five damage. Other abilities of this character include Strong Arm (adds 3 damage to Spear Toss), Pride (the mini gains additional 1 damage after defeating an enemy), and Stun Shot (stuns an enemy hit by the Spear Toss attack for three seconds).

From ranged minis, we now move to the area minis, and the first one on our list is the Wizard. Obtainable through the in-game store, quests, or chests, this mini comes with a low HP and damage. Nevertheless, like most of the minis on this list, the Wizard comes with unique skills that the player can exploit in the arena. For instance, the special skill called Fireball allows the Wizard to execute a fireball attack towards enemies in a plus formation.

Other skills of this mini include Expand (enhances the Area damage of the Fireball attack to a single tile on all sides), Ignite (adds 2 bonus damage to the Fireball for four seconds), and Spicy (reduces enemy healing by 50% for a short amount of time). 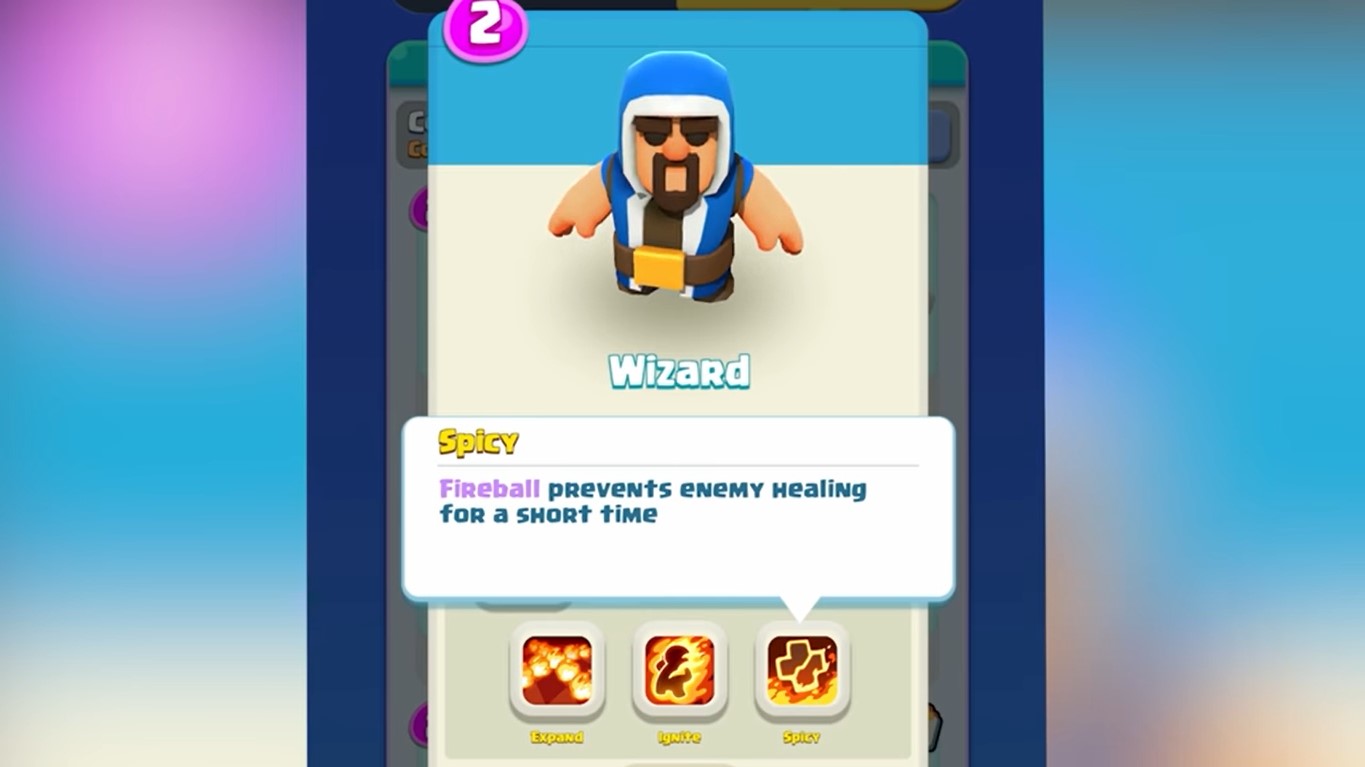 Opposite to the Wizard is the Ice Wizard which is also obtainable through the in-game shop, quests, and chests. With a low HP and damage, the Ice Wizard’s power comes from his unique skills. Frost Bolt is its special ability, which slows down the movement and attack speed of its enemies. Other skills of this mini include Chill (increases the slow effect of the Ice Wizard’s attack). Next, we have the Blizzard (enemies in a plus formation will get affected by the Frost Bolt). The last one is Ice Bomb (freeze all enemies in a diamond formation the moment he is knocked out).

The Swordsman is a 2-Elixir mini obtainable through quests, chests, or the in-game store. He has moderate damage and HP with special skills that can you can use in the field. The Sword Dance is a super skill that allows him to execute five strikes to five random enemies nearby. Other skills of this mini include Mastery (the mini gains full energy if the Sword Dance knocks down an enemy). Another one is Big Fish (stuns enemies hit by the Sword Dance for 1.5 seconds). The last one is Quick Action (increases the hit of the Sword Dance by 3 but can also damage allies).

The final 2-Elixir mini on our list is the single-target melee unit called the Skeleton Guard. Like most 2-elixir units, the Skeleton Guard comes with a low HP and damage. The special skill of this mini is Shield Up. This skill provides him with a 7-shield bar on top of the HP bar for a short period. Other skills of this mini include Iron Shield (adds 5 more shields to Shield Up). The next one is Growth (boosts the Skeleton Guard’s movement and attack speed when Shield Up is active). Finally, we have Quick Action (Shield Up Activates at the beginning of each round). 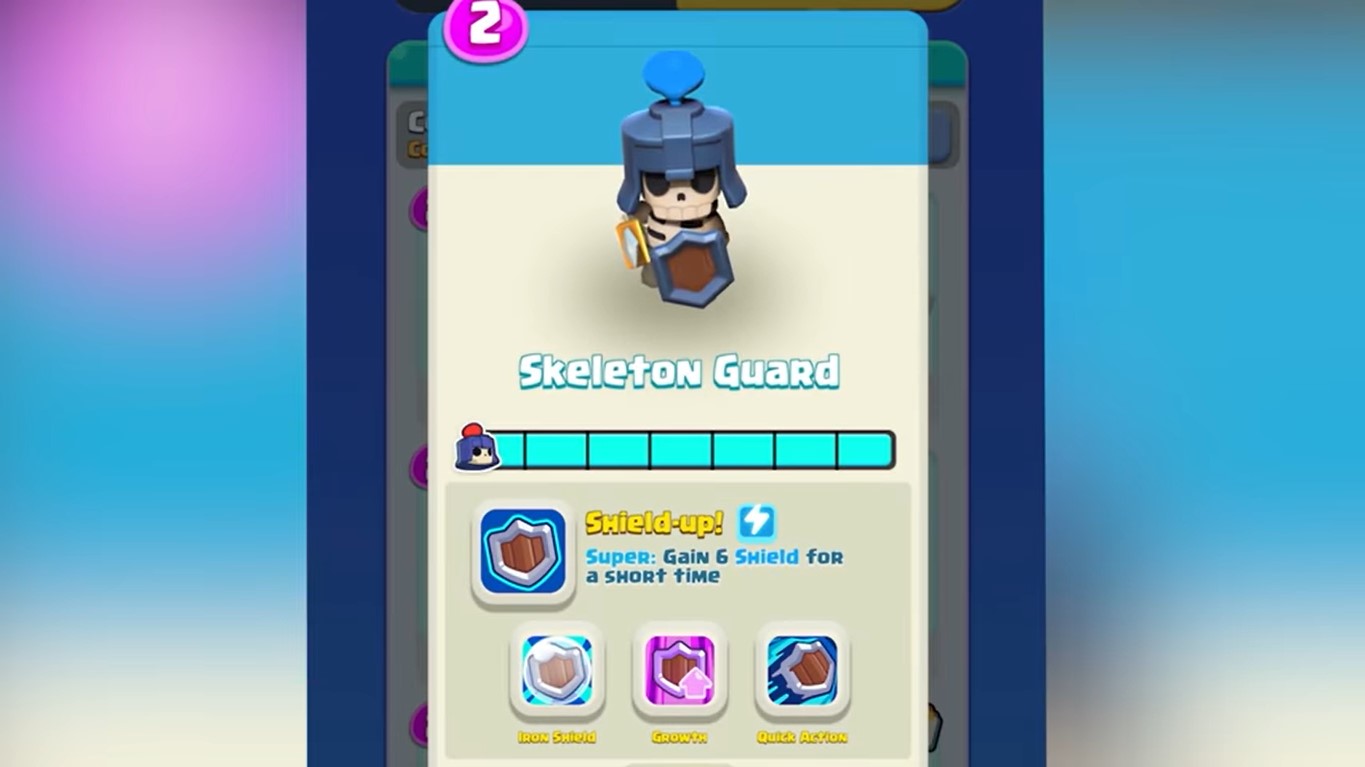 Get to Know the Clash Mini Characters on PC

Now that we’re done with the 2-Elixir minis available in the game, experience the excitement on your computer. All you need to do to play Clash Mini on PC by downloading it for free here at Games.lol to know the Clash Mini Characters!