Strategy games are one of the most popular genres to play nowadays. Just like playing chess, these games challenge your decision and strategy-making skills. But what makes these games amazing and addicting is that they incorporate fun elements into the gameplay. Though these elements vary per game, they ultimately help in making the game stand out.

What is Clash of Clans?

Clash of Clans is a free-to-play game by Finnish game developer Supercell. Released in August 2012, this strategy game received a lot of positive reviews and feedback from game critics and players alike. In fact, it’s so successful that even on its first few months of release, it’s already considered as one of the top-grossing games of 2012. Moreover, the game earned a whopping $1.5 million in revenue per day in 2015—and it’s even a freemium app!

Eight years have passed, and this fantasy-themed strategy game is still relevant today. Currently, Clash of Clans has over 53M downloads in Google Play Store. It also garnered a 4.5/5 rating on the mentioned platform. Although its current ranking is not like before, it remains one of the top-grossing games to date.

What is Castle Clash?

Castle Clash is a free-to-play strategy game from the developers of IGG, a Chinese-based game developer. It was first released to the public in July 2013, just months after CoC’s release. Although it doesn’t get the same popularity and recognition as CoC, it still garnered huge success. One proof is that it comes with a passionate fan base as millions of players are still playing this game even today.

Both Castle Clash and Clash of Clans have similar gameplay. Firstly, it’s a strategy game, so the game’s premise is all about finding the best strategies to create the strongest tower defense in your base. To be specific, players need to put up buildings and structures and place them strategically to provide a better defense to their base. Apart from the structures, players also need to hire troops and train them to provide additional defense to their base.

Besides defending the base, both troops in CoC and Castle Clash are also crucial in invading and looting other players’ bases. This is mainly because of resources. And with the resources they loot, these will help them in creating a strong defense to their bases.

Apart from the resources, you will also get achievements every time you battle another troop in CoC and Castle Clash. Although their raiding mechanics are different, the goal for doing so is the same for both games: for players to rank.

Major Differences Between Both Strategy Games

Now that we’ve talked about the similarities of these most-played strategy games, let’s talk about the major differences between both the games. Here, we’ve boiled down into four differences.

Hiring heroes is necessary when you play Castle Clash. In fact, they are crucial in winning the game as they are your main attacking units. Moreover, there are many ways for you to level up your heroes. Among these include raiding another base or fighting various monsters in dungeons.

You’ll find many heroes in Castle Clash. In fact, there are more than a hundred heroes you can choose from in this game. Moreover, these heroes are divided into three kinds—Ordinary Heroes, Elite Heroes, and Legend Heroes.

Ordinary Heroes are the easiest heroes to acquire. However, despite their skills and stats, they are not advisable to use in the frontlines. Although you can use them as support during tactical situations. Elite Heroes, on the other hand, have better stats than the Ordinary ones. However, they are still best used as support heroes during fights. Legend Heroes are the ones that are best to use in battle as they are the toughest among the three. The stats of your Legendary Heroes alone will be the basis of your power in battle. But unlike Ordinary Heroes, they are difficult to get.

Furthermore, there are many ways for you to hire heroes in Castle Clash. You can hire them with gems, with shards, with Honor Badges, with Hero Cards, with rewards, and with soulstones.

In Clash of Clans, you don’t get to hire a hero. Instead, you have to unlock them by building their respective altars on your base. Moreover, each of these heroes requires different Town Hall levels to unlock them. When it comes to upgrading these heroes, you don’t have to train them or pit them against other troops. Instead, you need to upgrade their respective altars, which would cost you a few Elixir or Dark Elixir of Builder Gold.

If you’re up for fast-paced gameplay, go for Castle Clash. One of the reasons it has faster gameplay is that it only requires less loot to upgrade buildings. What’s more, upgrading buildings can easily be done in Castle Clash because it’s easier for you to hire more builders.

In Clash of Clans, upgrading buildings takes a lot of loot requirements. Moreover, upgrade time takes a long time as well. Even when you start a new game, it will take you more than an hour to build structures and buildings since you only start with two builders. If you want to hire more builders, you need to spend money on it, which is not advisable—not unless you have spare money to spend it.

Raiding and fighting other troops is also faster and more efficient in Castle Clash than in Clash of Clans. In Castle Clash, surviving troops will return to your base after a fight. As soon as they return, you can utilize them again to battle in the next fight. But in CoC, surviving troops won’t come back to your base. Therefore, you need to retrain another set of troops for 30 minutes or so before you can set them up for another fight.

Aside from building your base and raiding, you can also join groups in both games. However, in Castle Clash, they are called Guilds, while in Clash of Clans, they are called Clans. These clans/guilds are beneficial for each player as they increase their achievements and resources to loot.

But here’s the difference between these games when it comes to groups: joining and creating a clan/guild. In Castle Clash, you are required to build a Guild Hall if you want to join a guild. Moreover, if you want to create your own guild, you need to have 500,000 gold coins and a banner. In Clash of Clans, you need to repair the Clan Castle to join a clan, which will only cost you 10,000 gold. Moreover, to build a clan, you must be able to pay 40,000 gold.

The Final Verdict: Which Strategy Game is Best to Play?

Ideally, Castle Clash is the best strategy game to play. With its fast gameplay, you simply won’t get tired of playing the game because the challenge is always different. Thus, every day you play is exciting. Not to mention, there are a bunch of cool heroes to choose from.

Despite the slow-paced gameplay of Clash of Clans, it’s a fair and balanced game compared to Castle Clash. Since it only has five heroes, there’s only little room for imbalance. Apart from that, the waiting game for upgrading buildings and heroes takes time. Thus, the game challenges your patience.

The decision on which strategy game is best to play all depends on your preference and your gameplay. Ultimately, both of these games are great to play and unique in their own ways. If you want to experience the differences and similarities of these great strategy games, download and play them on PC with Games.lol. 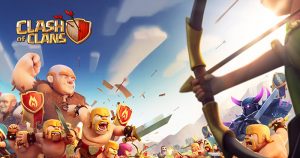 Is Clash of Clans Still Relevant in 2019?

Clash of Clans. A highly-renowned game title that swept millions of mobile users thanks to its engaging gameplay and competitive scene.
Posted on May 28, 2019