Clash of Clans has been one of the pillars of MMO games. Since its inception, the game has taken the world by storm, amassing millions of downloads from players across the globe. From clan wars to base-building, every element is what makes the game interesting to play. One of these elements is the hero troops. They are the most powerful, if not the essential elements in the game. Continue reading to know more about the powerful heroes in the game.

What is Clash of Clans Heroes?

Hero troops are considered the most powerful group of warriors in Clash of Clans. These units need only one training session due to their immortality. One downside to these warriors, however, is that it takes time for them to regenerate if defeated. This means that you need to make sure that you use each of these troops strategically to take full advantage of their abilities. Furthermore, there are multiple types of hero troops available in the game. We will be taking a quick look at each of these troops through our visual presentation below.

Types of Heroes and Hero Skins

Hero Skins, on the other hand, are purely aesthetics and do not affect the abilities and skills of heroes. Getting ahold of hero skins requires a $5 Gold tier for the second season and completion of the various challenges required. With that said, check out some of the hero skins available in the game below.

The Archer Queen, on the other hand, has nine skins. These skins include the Archer Queen, Gladiator Queen, Valkyrie Queen, Autumn Queen, Ice Queen, Warrior Queen, Primal Queen, Clockwork Queen, and Pirate Queen. Just like the Barbarian King, the Archer Queen will also defend the village from attacks as long as she is not regenerating HP. 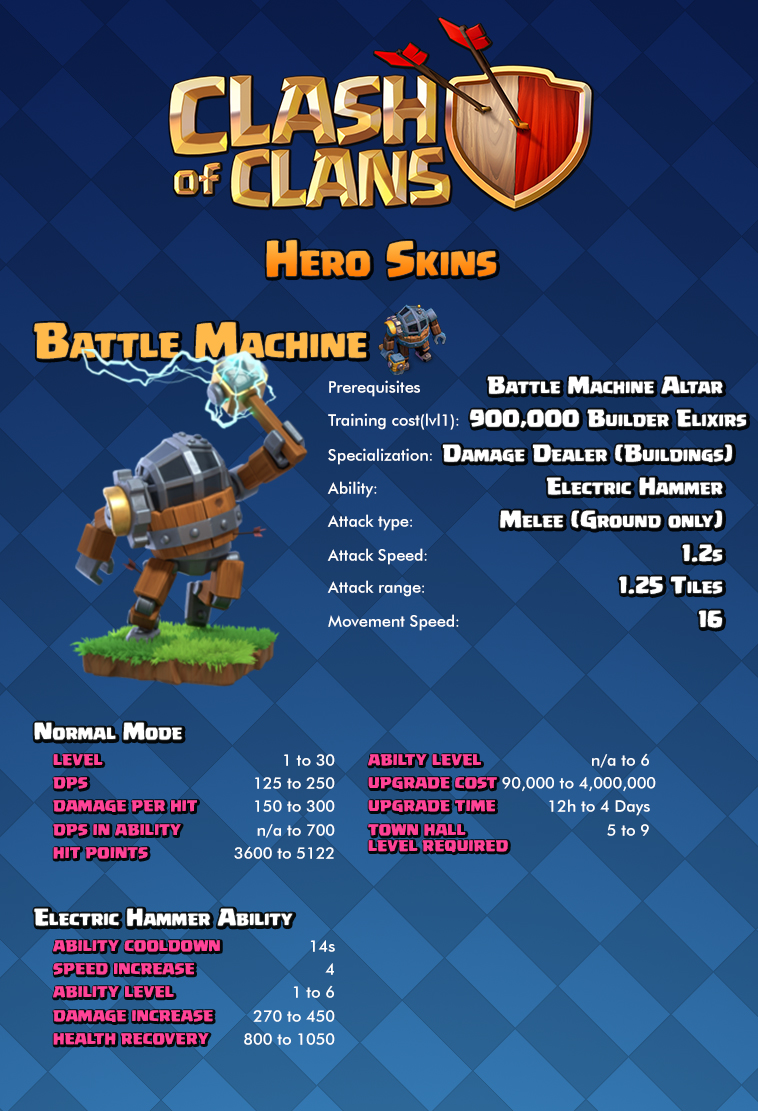 The third infographic contains everything you need to know about the skills and attributes of the Battle Machine. Unlike the rest of the heroes in the game, the Battle Machine does not have any skins available except for the base skin. This is because this hero undergoes a process similar to metamorphosis wherein it undergoes a change in appearance as it levels up. Also, this is the only hero that will not defend the camp from enemies due to the various tasks assigned to it.

One thing that you should consider when looking at these infographics is that the attributes shown are from level 1 to maximum. This means that the highest number in the attribute section pertains to the hero achieving max level or max upgrade and the least number for the base level.

The infographic above showcases all of the available skins for each of the heroes available in the game. It also shows the season when the specific skin was released and how to obtain them. For Clash of Clan players who want to obtain various skins for their heroes, the information above is crucial as it serves as a guide for you to get the hero skin you want.

As a summary of the infographic above, Clash of Clans features three game modes: Practice, Single Player, Raids, which is the multiplayer part of the game, and the Season Challenges. You can also find details on the Clan Gameplay modes in the infographic, which pertains to the various multilayer modes you and your team can partake in. These modes include the following:

Clan Wars in Clash of Clans

The final multiplayer mode is the Versus Battle, which is the regular versus multiplayer mode exclusive to the Builder Base. With that said, those are the main features waiting for you in one of the most iconic multiplayer game in the world. If you want to explore more of the exciting features of Clash of Clans on PC, download and play it for free here at Games.lol. 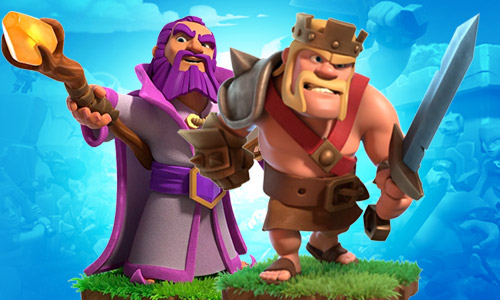