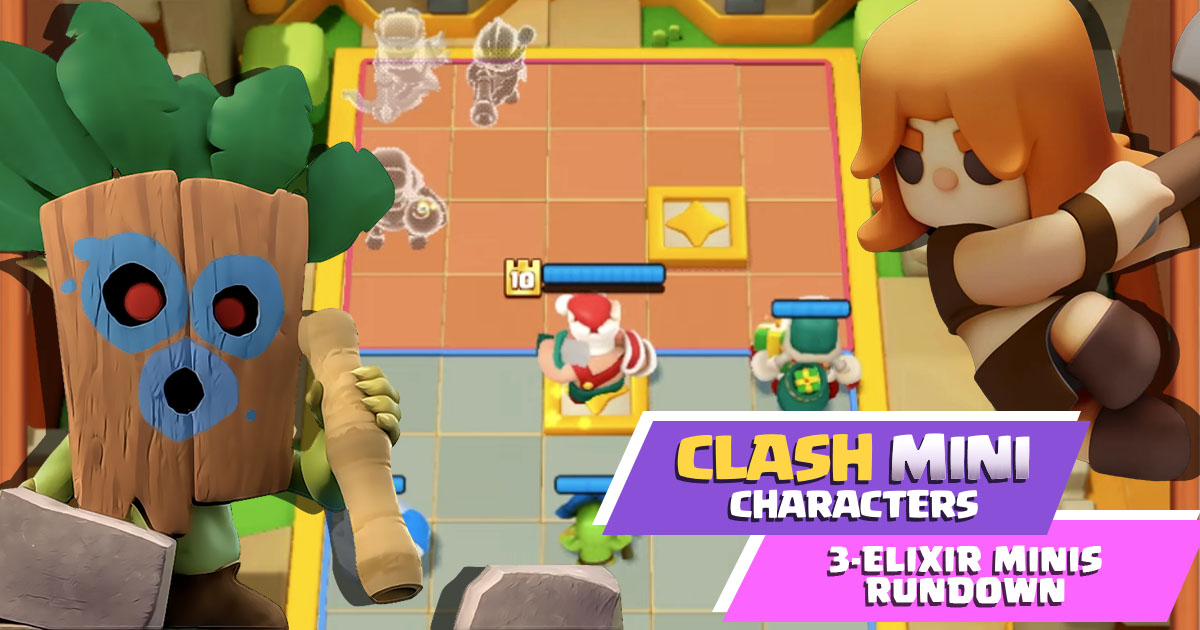 Clash Mini is a new game from Supercell that was launched last December 2021. With no less than two million downloads in the first month of its launch, this new game title is surely becoming one of the next big names in the strategy genre. Additionally, it features mini versions of the most symbolic heroes and characters from other popular game titles like Clash of Clans and Clash Royale from the same developer.

Clash Mini is a new game title from Supercell that lets players form armies and collect heroes. You can use these elements in your matches against other real-time players. Just like other games from the strategy genre, Clash Mini comes with customization, an upgrade system, and a solid lineup of characters. 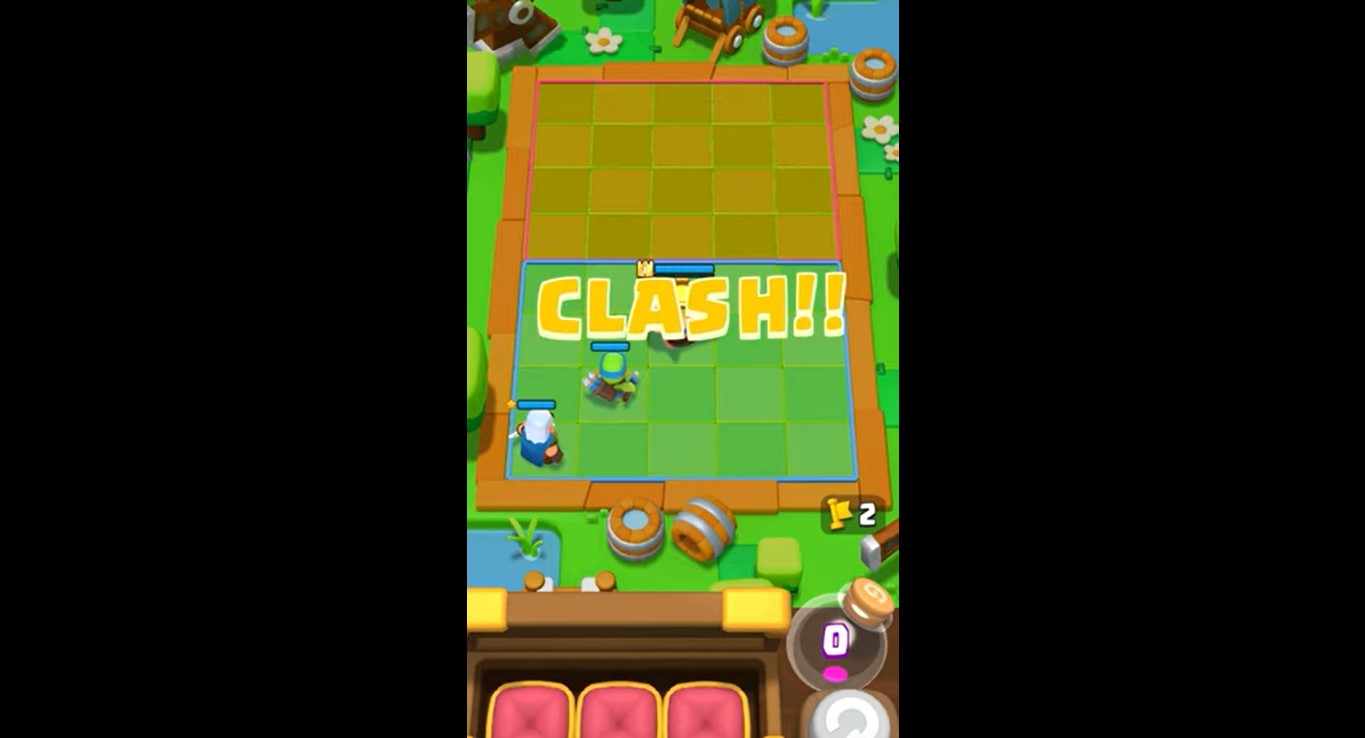 Clash Mini has various heroes and minis that you can use to your liking. Your heroes are the primary leader of your team while the minis act as supporters. Moreover, you start all your matches with your chosen hero on the field and you can move to wherever you want to. In this auto-battler, placing your hero strategically gives you a good chance of winning any match. Furthermore, your minis act as support for your heroes in every battle. So regardless of the mode you play, you must bring a good team on the field.

Just like how you usually play Clash Royale or Clash of Clans, you can choose different units to bring to the match and complete your lineup. Since this game is very similar to Clash Royale, you need to accumulate a certain number of elixir before being able to deploy the minis that you want.

Every character is uniquely complete with its special appearance, target preferences, and abilities. To view the minis that you have in your arsenal so far, you can check the “Collection” page. There, you can view the info and stats of your heroes and minis. Currently, these are the Clash Mini characters that require 3 elixirs to be summoned to the field – Bowler, Dart Goblin, Giant Skeleton, Golden Giant, Healing Ranger, Lumberjack, Mini P.E.K.K.A., Musketeer, and Valkyrie.

The Bowler is a single-target, ranged mini character with average accuracy and decent damage output. Appearance-wise, it looks like a bowling champion with a blue color who carries a boulder on one arm and wears brown pants. In addition, this mid-range mini can deal good damage while staying just a little bit far from the opponent. It specializes in stunning all the opponents in its path with its skills.

The Dart Goblin is another Clash Mini character that needs 3 elixirs to deploy. It’s a mid-range mini that can stack its attack speed. It also specializes in dealing high damage as a mid-ranged unit if kept alive until the late game. Appearance-wise, it looks like a green-colored little Tiki with brown pants holding bamboo as a weapon on its right hand.

The Giant Skeleton is another single-target mini. Except for this time, it’s a melee unit with high accuracy but low damage output. Appearance-wise, it actually looks like a giant skeleton wearing a blue ushanka and holding a big bomb on his left hand and a gunpowder barrel on his back. Contrary to other Clash Mini characters, Giant Skeleton specializes in death, ironically. When it dies, it drops the bomb and stuns the minis around it, dealing lots of damage.

The Golden Giant kind of looks like a sumo wrestler wearing a belt and a golden helmet that fully covers its face. This Clash Mini character uses its helmet as a weapon to deal damage to whichever is near it. Additionally, when it dies, it can heal its teammates around it. 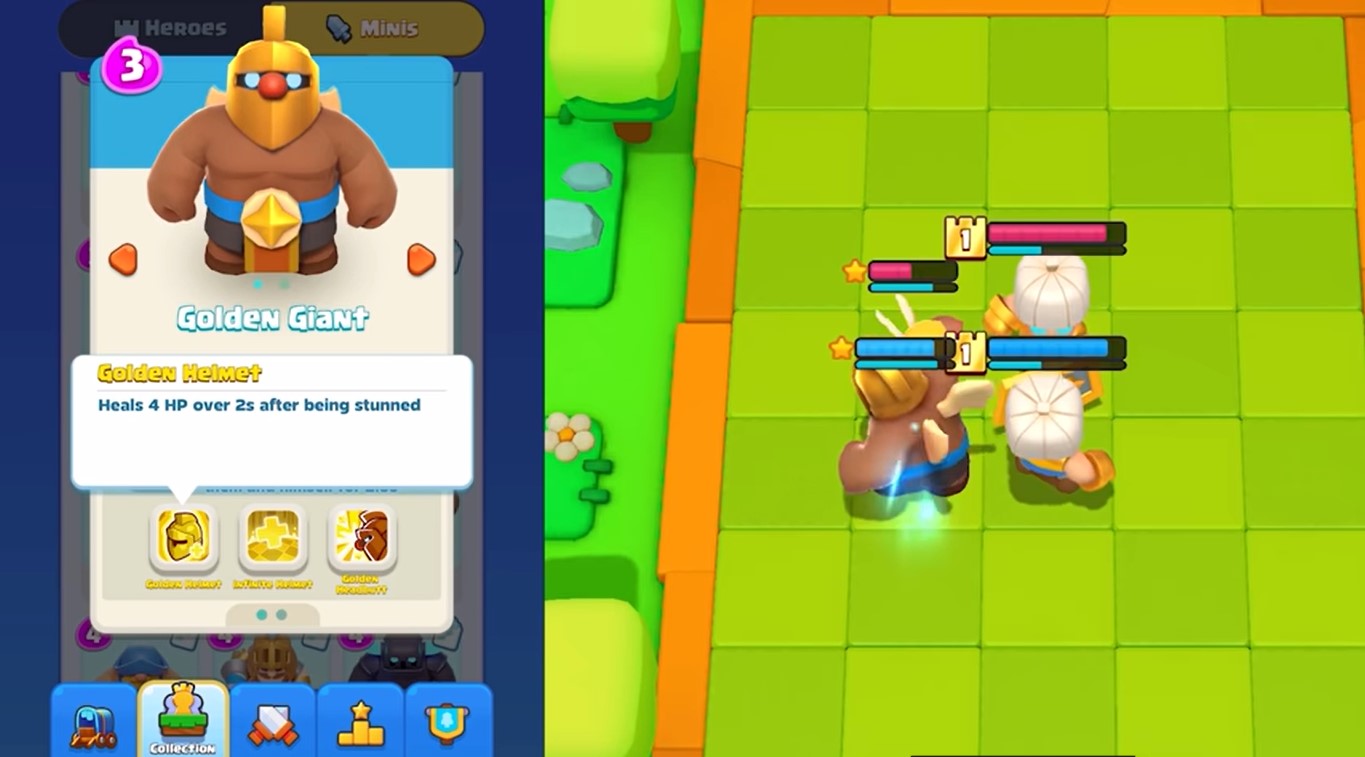 The Healing Ranger is a long-ranged and single-target unit with low accuracy and damage output. It has white hair and small white wings; with a magic spear on its right hand and an orange hood on top of a blue robe on its body. As its name suggests, this unit heals allies and increases its attack speed with its spear.

The Mega Knight or Lumberjack is a dual-type of unit wherein it is a melee attacker and a ranged supporter altogether. Unlike the previous Clash Mini characters that can be unlocked using chests, quests, and shops, you can only acquire Lumberjack by opening chests. Furthermore, it has high accuracy and decent damage output against one opponent. Appearance-wise, it holds a pink vial on its left hand and wields an axe on the other. It wears a blue ushanka, just like the Giant Skeleton, over its orange hair, mustache, and beard.

The Mini P.E.K.K.A. is another single-target, melee unit with average accuracy and high damage output. It acts as a tank that deals tons of damage and reduces the enemy’s energy. Looks-wise, he wields a sword on his right hand. Atop its black armor covering his body, there is an inverted triangle on the face and two horns around the ears; all of which glow blue. He specializes in reducing the opponent’s energy and having a small percentage of dealing double damage to the enemy.

The Musketeer is a long-ranged Clash Mini character with balanced abilities. It looks like a musketeer, as the name implies, with purple hair, a metal helmet, and carries a big blunderbuss musket. She specializes in stunning and pushing back opponents that can hit multiple targets. She can heal herself and has moderate accuracy with low output damage.

Unlike all the 3-elixir characters so far, the Valkyrie is the only multi-target mini with high accuracy and damage output. She wields a long axe with both hands, has long orange hair, and wears a blue dress with brown shoes. Despite being a melee unit, she can deal area-of-effect (AOE) damage to surrounding enemies. She also specializes in increasing the attack speed of her allies.

So there you have it, a complete list of Clash Mini characters worth 3 elixirs to deploy. However you plan your lineup, it’s noteworthy to remember to deploy Minis and Heroes that can harmonize with each other based on your gameplay. Play Clash Mini here at Games.lol today!