Marvel Contest of Champions is one of the most downloaded games here at Games.lol. And yes, you can play it directly on the PC by downloading the game here. Alright, so let’s get to the nitty-gritty. Marvel Contest of Champions may look like a dummy-fast casual fighting game but as you invest more time in it, you slowly realize how deep and enthralling it is. For starters, yes it’s very easy to play. But, in the long run, you must soon understand everything that makes your Champion stand out above the rest. Let’s check out the essentials that you need to know about the game.

You can go ahead and skip this if you know how to play the game. Otherwise, stick around for the layout. So it goes like this: Clicking the right screen does a strike while holding it unleashes a power strike. Swipe or drag your mouse to the right to do a medium attack while holding the left part of the screen to do a block. Easy, right? Well, you have to know how to use them in the best ways possible. 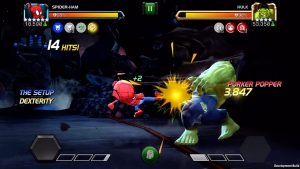 The Combos and Counters

Just like any fighting game, you will need to do combos and counters at the same time in Marvel Contest of Champions. It doesn’t matter who you is your main – what matter is that you know what to do in any situation. For starters, do a combo by mixing up quick strikes, medium strikes and power moves. When you finish a combo, anticipate the enemy and block. Rinse and repeat. But, of course, that will take a while and some getting used to.

Of course, each hero and villain is unique from each other; not just for their powers but for their buffs and debuffs. Take note about every individual’s strengths and weaknesses. Some carry Armor Damage, others with Bleed, and a handful of helpful Critical Boosts. There are no mistakes in choosing which hero is with passives and actives. What matters is how you effectively use them. You can check all their powers in the Select screen. That’s why it’s called Marvel CONTEST of Champions, right?

The Tiers and Upgrades

Since Marvel Contest of Champions is F2P, expect the usual gacha-type loots and characters sorted through Tiers. The common ones are 1 to 3 stars, rare characters are 3 to 4 stars and legendary types are 5 stars. But is it important to pull 5 stars? While getting a 5-star champion is awesome, it’s not necessary. In fact, you can invest all your time in your common champions by upgrading them. With enough resources, they too can face off against 5-star champions. In the end, you’ll be shouting EXCELSIOR!

Knowing these are very important in the Marvel Contest of Champions. Get to play the game now on your PC for absolutely free! And yes, it’s up to date too. Download the game now! 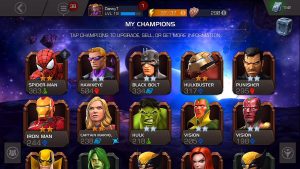