In the second week of January 2016, an interdimensional or rather an intermediate jump took the video game community by surprise with the launch of Pocket Morty, the official video game version of Rick and Morty. If you are reading this blog in 2021, do not worry.

You are still in the same dimension as you were yesterday. No, you did not travel back in time or accidentally walked into a wormhole that took you to a place and time. You are still in 2021, reading about the beginner’s guide for Pocket Morty, a game launched five years ago. But, are you ready for an adventure now?

If you are a real fan, you are no stranger to terms like multiverse travel, wormholes, or aliens. After all, a game featuring the smartest person in the universe requires constant evolution to appease the ever-growing community. Before we jump into the beginner’s guide, let us take a quick overview of the overall premise of the only video game depiction of the uber-popular Adult Swim series. 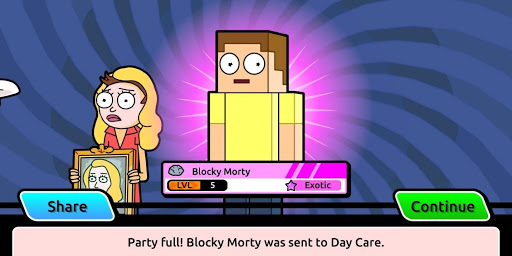 Pocket Mortys – A Parody Spanning Across the Whole Multiverse

For those who have yet to watch the animated series, an overview of the Rick and Morty universe is not necessary to enjoy the game. However, first-hand knowledge of the Grandson/Grandfather tandem will make you appreciate the game even more.

All you need to know is that Rick and Morty is a series focused on the interdimensional exploits of Rick Sanchez. Or better coined as the smartest person in the universe and his grandson Morty Smith. Most of the characters, including the locations featured in Pocket Morty’s, are from the animated series.

What Lies Behind Pocket Morty

Pocket Morty is a spinoff of the tenth episode of the first season. Rick Sanchez, the trans-dimensional council of Ricks, arrested Rick Sanchez for kidnapping Morty and killing Ricks. With a simple twist, Pocket Morty was able to turn the events of the original episode into a Pokémon parody that spans across the entire multiverse. Players must collect, train, battle, and capture as many Morty as possible across the various dimensions.

As simple as the plot may appear, Pocket Morty is more than just a simple monster-collecting game. To make the game as immersive as the entire Rick and Morty narrative, the developers hammered in multiple elements from other genres. One example is the Gacha system common to Japanese games. Another is the single-line-party map exploration common to classic RPG titles. 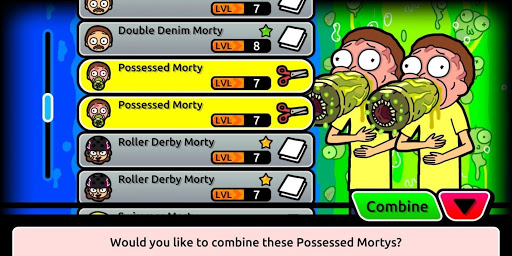 Pocket Morty also employs a character merging system as an alternative to the experience-based character leveling system. This means that you can merge two Morty of the same kind to produce a rare or exotic Morty.

In addition, the game also comes with a crafting system, side quests, mini-games, and much more. Pocket Morty may be a parody, but it’s packed with a plethora of contents and features that will eventually overwhelm the player, just like the animated series did to its audience.

To help with this future dilemma, we believe that a detailed list of reminders will make the game more manageable, especially for players who are new to this type of game. With that said, feel free to check out our summarized list of reminders that will serve as a Beginner’s Guide for Pocket Morty.

Pocket Morty is a game that encourages players to concoct a strategic system to manage their stay in the game properly. Without an effective method or strategy, you will be spending more time in the game with less progression. In other words, you will be wasting your time roaming the multiverse. Although you can still advance further into the game, it will take longer than those who follow a routine that covers all the essential activities in the Citadel. 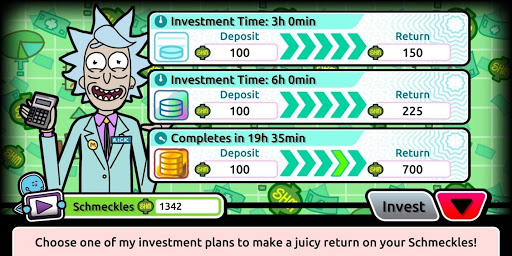 Another unique gameplay feature in Pocket Morty is the investment option. This feature will allow you to invest your hard-earned cash through Investment Rick. You will find Investment Rick in the Citadel across the portal. As you can see in the image above, the return of investment is time-dependent.

Meaning the longer time you leave your money with Investment Rick, the bigger the returns. With that said, it is highly recommended to visit Investment Rick every time you return to the Citadel. Doing this will fatten up your bank in no time.

There are a few exceptions in this rule, and those are the uncategorized Morty, one of which is your starting Morty. That said, you need to have a balanced deck for you to counter all types of Morty your enemy will throw at you. 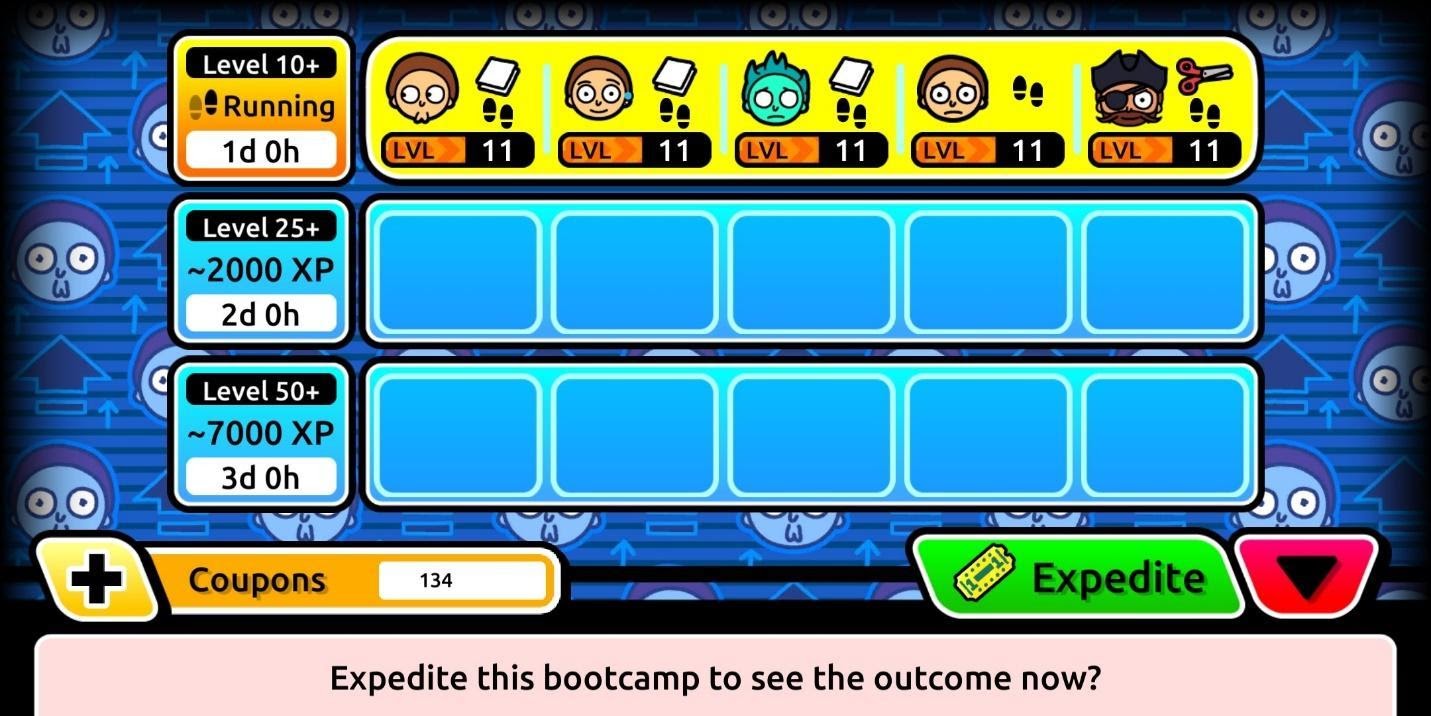 In Pocket Morty, Campaign and Multiplayer do not intertwine with each other. This means that your progress in the campaign mode will not entirely affect your multiplayer profile. Like most of the Rick avatars you unlocked in the Campaign mode, some features will carry over to multiplayer. However, you will start from scratch in terms of your Morty collection in Multiplayer.

Another thing that you should remember is that the Daycare set up in multiplayer will not have the “Combine” and “Multiplayer” options. This means that you need to evolve your Morty through PVP battles and collect duplicates in the wild. The same goes for the rest of your items and power-ups, meaning you cannot bring your MR. Meeseeks Boxes from the campaign mode to multiplayer and vice versa.

Prioritize the Completion of the Campaign Mode

If you are new to Pocket Morty, it is highly recommended to complete the Campaign Mode before you jump into Multiplayer. You see, the main campaign in Pocket Morty will serve as your main training grounds for multiplayer. From the looks of it, most of the features in the Campaign modes are deconstructed versions.

One example is the Daycare setup which comes with the “Bootcamp” and “Combine” campaigns. In contrast, the DayCare in multiplayer only comes with storage and “Evolve Morty” features. Playing the primary campaign will allow you to master the “combine” feature, making evolving Morty in multiplayer a breeze. 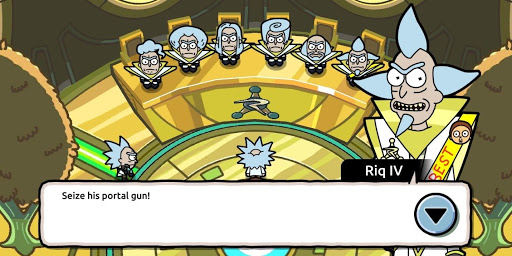 Now that we have reached the end of our spoiler-free beginner’s guide, next is playing the game! All you need to do is download Pocket Morty here, easy right? See you at the Citadel. 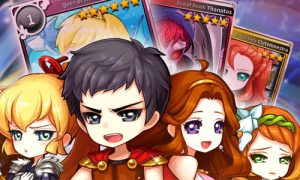 Launched in 2018 by Nikeagames, God’s Quest: The Shifters is a freemium game that combines the immersive elements of a visual novel and the fun strategy-based mechanics of a kingdom builder. Although the game is not as successful compared to other MMORTS, it has features and elements to keep you engaged.
Posted on July 4, 2021 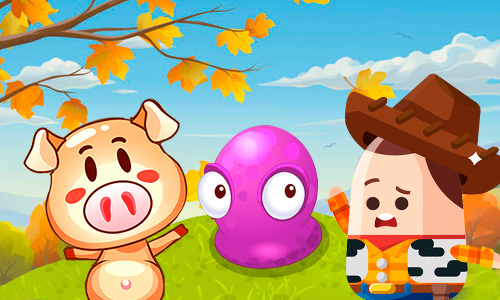 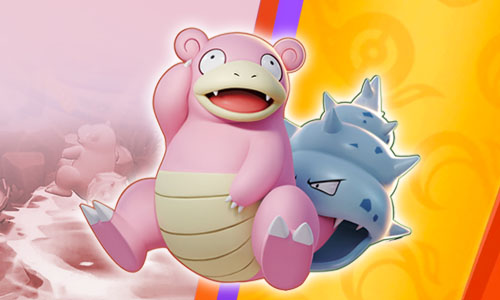