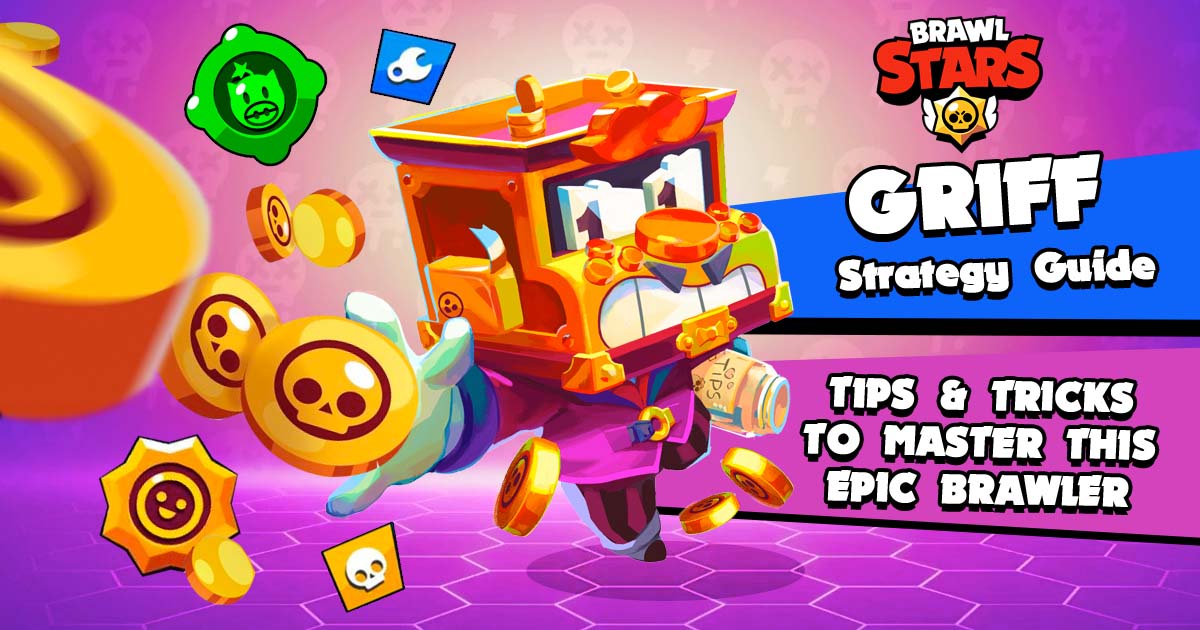 Griff is an Epic Brawler that you may get via Brawl Boxes or early for a brief period of time. Griff has a good chance of doing some serious harm. He attacks by launching three cone-shaped waves of three coins apiece. His Super launches five banknotes in the form of a cone that do damage as they spread out and move forward before returning to him.

Griff Brawl Stars fights with his money and owns the Starr Park Gift Shop. Griff can now be acquired through Brawl Boxes, as opposed to exclusively dropping after finishing the Griff Challenge in the past. Now, this article will tell you all there is to learn about Griff in Brawl Stars.

Each character in Brawl Stars has its own purpose and technique. But Griff, of course, has a different one. Here are the basic knowledge and ideas that you need to know about Griff’s Attack.

Griff fires three waves of three coins each, with the coins dispersed in the shape of a cone. When used up close, the attack causes a significant amount of damage. His attack fires three waves, which results in a slow unload speed of one second.

Five piercing banknotes are thrown by Griff; they move forward, spin for a second, and then come back toward him. When several banknotes strike an adversary, the Super causes significant damage. When tossed, the banknotes cannot pass through barriers; but, upon return, they can. As they move farther, the bills form a broad cone and cause greater harm.

Griff drops a piggy bank loaded with firecrackers. Then, after a brief wait, burst, obliterating barriers and delivering 1000 damage to nearby enemies.

Griff throws a piggy bank after a 2.5-second delay explodes. This technique creates 1000 damage, knocking back foes, and obliterating barriers in a 2.67-tile radius. 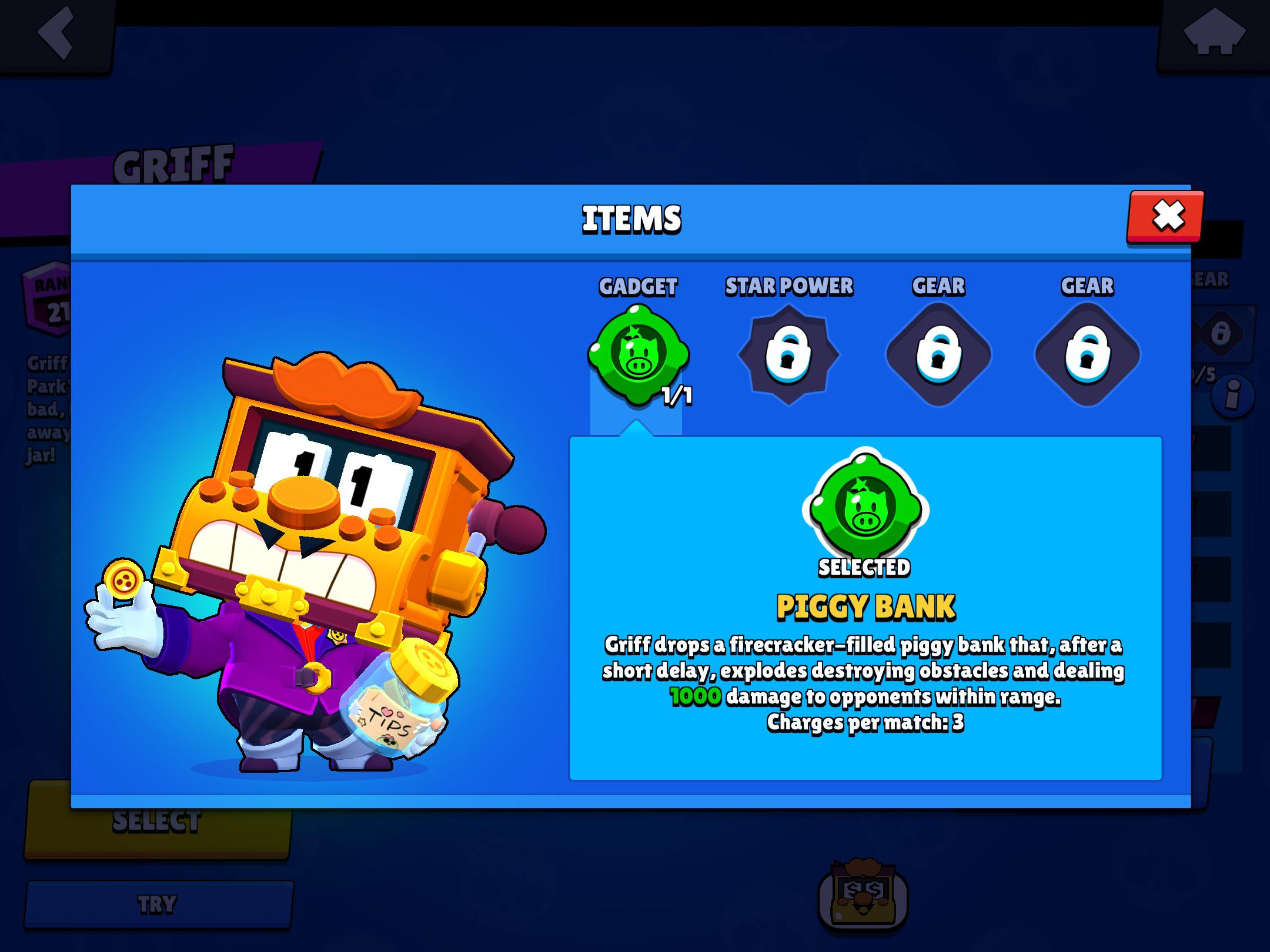 By turning on this gadget, Griff can fire four sets of coins rather than three during his subsequent attack. The use of the gadget will be indicated by a glowing joystick and a gadget symbol that will appear above Griff’s head. This attack is followed by the commencement of the Gadget’s cooldown.

There are also special star powers that Griff in Brawl Stars can use. Follow and read through this guide below to see how to use them effectively.

Angry Griff throws coins more quickly, cutting the duration for a full volley in half. Griff cuts the unload time of his assault by 25%, going from 1 sec to 0.75 secs.

This Star Power restores Griff even when he is attacking or absorbing damage, unlike self-regeneration. External health boosts or healing debuffs may have an impact on the quantity of vitality Griff can repair.

How to Play Griff Brawl Stars

Griff must constantly be aware of his surroundings. Because of his attack’s poor unload speed, he struggles at farther ranges. He has a high burst damage attack at close range, but his Super is relatively potent. You can increase Griff’s damage output by locating a healthy medium ground.

Griff is a good choice for Heist due to his great damage output and zone denial. Gem Grab, Hot Zone, and Siege are a few more game modes in which he shines. His Cashback Super and the Piggy Bank device both have potent offensive and defensive capabilities. Do not be afraid to hit his super even from a great distance because his impact from the super rises based on the radius from which he hit. When he also hits his super from a greater distance and delivers more damage, his supercharges faster.

Here are a few tips that you can take note of to better play Griff Brawl Stars. Use these tricks to better perform all the added special powers and gadgets Griff has.

Griff’s close-range Super can strike more banknotes, but it also does less damage. Prioritize his Super against faraway foes to cause more damage, recharge it more, and provide enough time for him to change positions. That way, the money hit foes as they were returning.

Griff’s primary strike is simple to master because it lacks any intricate systems. To master him, players simply need to target weaker brawlers and destroy them with Griff’s tremendous damage potential. Griff must keep his distance from tanks and attack them by gradually reducing their health.

No matter the range, Griff’s Super provides significant burst damage. Because of this, he has a variety of uses for his Super, like employing it to quickly dispatch rival Gem bearers in Gem Grab or to outright decimate close-range opponents. Even after being vanquished, Griff’s Super remains active, causing a little bit of additional damage and enabling some Super recharge.

You can still be healed by Griff’s Business Resilience Star Power if you’re engaged in combat or receiving damage. This can be used to cure while fighting. But this can make it harder for opponents to beat you or to recover while completing a mode objective.

To get Griff to utilize more of his Super, try to strike at least two or more enemies with it. This will also get most Brawlers within range of Griff’s primary attack or his Super, which will usually finish them off. Due to Griff’s Super’s large spread and extended range, it is rather simple to accomplish this.

Griff has a stronger defense against close-range Brawlers thanks to the Keep the Change Star Power because it allows him to attack more quickly. Griff can protect against those Brawlers by utilizing his Super in addition to his assault.

Now that you know the basic techniques on how to play Griff, it’s time for you to jump back into the game. What better way to play Brawl Stars than on Games.lol, you can do that by enjoying the game on your screen! 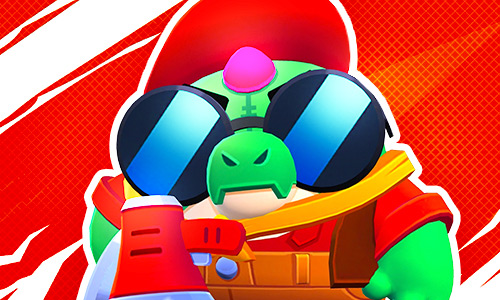 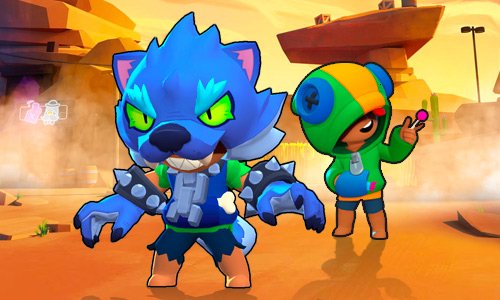 One of the most popular multiplayer action games that you can play is Brawl Stars. It’s a MOBA game, but unlike the typical MOBA, its matches are 3v3.
Posted on September 9, 2022 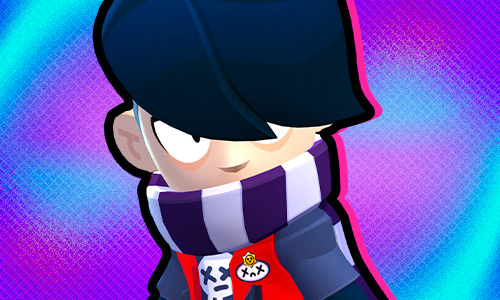 In the third-person, top-down arcade shooter Brawl Stars, you take on the role of your selected Brawler and participate in some events. You compete against other Brawlers to achieve a certain goal specific to each type of event.
Posted on August 25, 2022